What a fun evening we had last night.  During the Hal Roach marathon on Turner Classic Movies, I had stuck Pups is Pups (1930) on my DVR.  I thought that an Our Gang short about puppies would appeal to my wife who is a dog lover, and perhaps to our dog, Sadie, who sometimes glances at the TV.  I was right!!!  A friend was over, who is also a dog lover, and the three of us (four, including Sadie) laughed so much that we had to roll the movie back several times to catch some dialog.  Well, Sadie didn't laugh much.

As the story starts, the gang is playing in their makeshift playground, which was probably a work area on the Roach Studio lot.  Five year old Dorothy comes out in a clean dress with her hair in lovely curls and heads straight for the mud puddle to jump in.  This was a running joke in a 20 minute film that was much more complex than you would think possible in such a short amount of time.  When I met Dorothy many years later at a Sons of the Desert banquet, she recanted her recollection of that movie for us!  Sadly we lost Dorothy in June last year at 85 years old.

There are two stories at work in Pups is Pups.  Wheezer has five puppies that he trained to come at the sound of a bell.  The rest of the gang are readying their pets to take them to a fancy dog and pet show in the city, where Farina has secured a job as a page (including a uniform with brass buttons).

We follow Wheezer who has let his puppies get away.  They are attracted to every bell they hear...an ambulance, an ice cream cart, a train crossing, whatever...and Wheezer can't keep up.  Meanwhile, the gang arrives at the pet show where they are not allowed in.  They sneak in anyway and wreak havoc, as you can imagine.

Wheezer is eventually reunited with his puppies in a scene that actually brought tears to my eyes!  He looks like he was genuinely attached to those little guys.  Of course he was only about five years old so that is not beyond a reasonable assumption.  And the gang is back at their play area, as Dorothy takes a final plunge in the puddle.

I decided to look up Pups is Pups in one of my books.  I bought Our Gang, The Life and Times of the Little Rascals many years ago.  It was written by Leonard Maltin and Richard Bann in 1977.  Even my books are getting old! 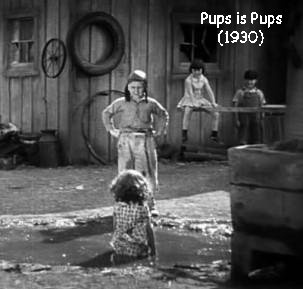 I had the pleasure of meeting Dick Bann in the 1980s, and he autographed my book.  It is interesting to note that this book, a paperback edition, has the price of $5.95 on the back.  You can't buy a paperback of this quality and content for anywhere near that as of this writing!  The 1984 printing of the book (with the red cover) is still available, and the newest version from 1992 is called The Little Rascals, The Life and Times of Our Gang.  If you love Hal Roach's Rascals as I do, it should be in your collection.  The film descriptions and biographies, as well as the well researched insight by the authors, make this a 'must have' book.

In the book, it is mentioned that Pups is Pups was the first Our Gang comedy to have a full musical score.  The music of Leroy Shield and Marvin Hatley has become synonymous with many Hal Roach comedies, including Laurel and Hardy and Charley Chase films, and is instantly recognizable.

There is even mention in the book of something that struck me as quite progressive for the early depression years.  In the Our Gang comedies, we see children of several races, all playing together with total disregard for the color of their skin.  Maltin and Bann go into some detail in the book about this, including comments from Farina Hoskins to back them up.

Pups is Pups appears to be available on some Our Gang DVD collections, and it is usually better to have a collection than just one film from a series.  A word of warning, shy away from any colorized versions.  Adding color does absolutely nothing for these movies.  It should be against the law, actually. 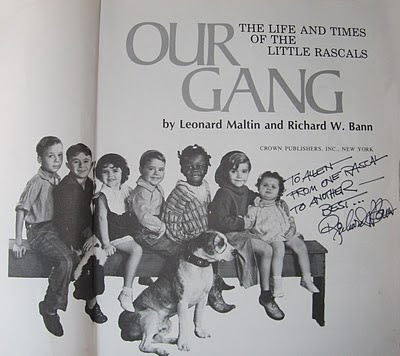 Sunday, February 20, 2011 update:﻿  I received the comment below from Richard Bann on Facebook yesterday.  Thanks again, Dick, for your knowledge and willingness to share.
If you are a member of Facebook, check out Dick's 'Notes' page for a very interesting piece on The Treasure of the Sierra Madre (1948), as mentioned below.  (And buy his books!!!)
Richard W. Bann -
"Very nice, Allen, thanks.  Vivendi is now re-releasing the Our Gang DVDs, a few at a time, until they are all for sale as individual DVDs.  Not a boxed set this time.  They are re-mastering the titles where they mistakenly worked from 16mm Blackhawk release prints....Whenever I drive to Paramount, I go right by the church where they filmed the closing scenes for PUPS IS PUPS...If you read the program notes for TREASURE OF THE SIERRA MADRE which I posted on FB yesterday (written for that other Hefner) there is a pretty good story about Bad-Brained Bobby Blake, still making all the wrong kind of news."
Posted by Bit Part Blogger No comments:

According to IMDb there were 2,074 comedies released in 1958.  We won't cover them all today.  When you look at the complete list, you realize that TV shows are included.  In fact, that number is not accurate at all.  Listings #3 through #42 are individual episodes of "Leave it to Beaver."  As far as theatrical movies, #1 is Gigi, and the next movie is #50, Indiscreet.  Then you go to "Father Knows Best" up through #88!

I was thinking about No Time for Sergeants from that year.  Sergeants came in at title #456, but there were only eleven movies listed before it.  I guess people were infatuated with television by 1958, but that doesn't excuse IMDb for allowing their computer system to create a misleading list.  There should be a way to filter out the TV shows.

Back to the movie.  I won't bore you with 'Permanent Latrine Orderly' Andy Griffith stories, but it was his second motion picture.  And it was Don Knotts' very first movie, the start of a lifelong friendship between the two.

Nick Adams (1931 - 1968) was well into his acting career and this was just two years before his successful TV series, "The Rebel" as Johnny Yuma.  In 1965 he was in three low-budget horror flix: Frankenstein Conquers the World; Die, Monster, Die; and Invasion of the Astro-Monster.  Sadly, Adams died in 1968 after an accidental drug overdose.

Myron McCormick (1908 - 1962) played the drill sergeant.  He was a delight.  He only made about a dozen feature movies, but he is also seen in The Hustler as Paul Newman's mentor/agent.  Look for him on TV, but he was better known as a stage actor.

Way down on the cast list we find Jamie Farr (b. 1934) in an uncredited role.  It was his fifth movie and he was still acting under his real name, Jameel Farah.

Now, go watch No Time for Sergeants again.  I know it's been a while since you've seen it.  And watch for all the wonderful Bit Actors who make this a great comedy.
Posted by Bit Part Blogger No comments:

When thinking of Wonderful, Wet Women, only one name comes to mind for most classic movie fans, Esther Williams (b. 1921), America's Mermaid.  She only made 23 features, but they are mostly memorable, and she worked with some big stars.

Back in the 1970s, during a vacation in Florida, we went to Busch Gardens and saw the Florida shaped swimming pool that she used for a film.  I just picked up a set of her films at Costco, and I am fixing to have an Aqua Esther Weekend.

Her first feature was Andy Hardy's Double Life in 1942 with Mickey Rooney.  It was not an 'Aqua Musical' as her later films were known, but it did show her talent, and more roles followed.

Her documentaries are as entertaining as her movies.  I have probably seen "Esther Williams at Cypress Gardens" made for TV in 1960, and I would certainly like to see "The Esther Williams Aqua Spectacle" from 1956. 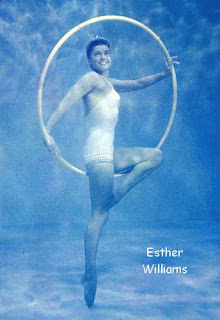 Williams only made two films with her long time husband, Fernando Lamas (1915 - 1982).  The first was in 1953, Dangerous When Wet.  Then, in 1963 they were both in Williams' final movie, Magic Fountain, which was filmed in Spanish for that market.
An interesting film at the end of the Aqua Musical era was Jupiter's Darling (1955).  This was a historical/aqua musical, starring Howard Keel (1919 - 2004) as Hannibal and George Sanders (1906 - 1972) as Fabius.  My guess is that it is less than factual.  Especially the underwater ballet with statues that come to life.
Pick up some Esther Williams films and have your own Aqua Esther Weekend.  Load your hair up with Vaseline to keep it styled underwater, and stick to the Aqua Musicals.  You'll have a memorable time with the Best of Esther.  And don't forget to watch for the Bit Actors.
Posted by Bit Part Blogger No comments: