Whatever became of Dick Lamparski?

If you really want to talk about bit actors and actors of bygone days in general, you need to do the research.  With me, it is becoming an ongoing project, just to keep up with the blog.

Starting back in the 1960s a fellow named Richard Lamparski wrote a series of books called, Whatever Became of...?  Each book contained a short biography of several actors and actresses with a vintage picture, and then an explanation of where they are plus a more current picture.  Of course, these books are now decades old, so most of the subjects are gone, as well as the books.

When I was actively involved with the Sons of the Desert, I was very privileged to meet Margaret Hamilton (1902 - 1985), who was a guest at our banquet.  We had a lovely lunch at the home of our Grand Sheik, and Ms. Hamilton was wonderful to talk with.  She told us about making The Wizard of Oz and all the stories about the Munchkins, which apparently were true.  She said that she was sickened by the green makeup she had to wear.  And she spoke about her other famous roles and the stars with whom she worked.  She commented that she always seemed to be cast as an older woman in the movies, even when she was very young. 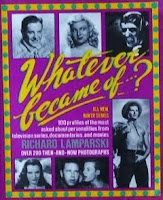 I took her portrait at that lunch, and Dick Lamparski asked if he could use it in his ninth edition of the series.  Whatever Became of...? Ninth Series

My guess is that the entire series is probably out of print by now.  If you happen to see any of the books for sale at a garage sale, flea market or used book store, they are well worth having.  As often happens with those of us who collect old things, many of them can be had at a bargain because they are no longer popular with most people.  This usually works to our advantage!

My goal is now to see if I can find the negatives from the pics I took back then and post some of them here.  As the years have gone by, much of my stuff has ended up in storage, so I better start digging!

Use the Internet as well as books to do your own research into the world of classic film.  Don't miss the many blogs, as well as the well respected authorities such as IMDB and Turner Classic Movies.  Delve into the little known, too.  A search for "Bit Actors" would be a great place to start!
Posted by Bit Part Blogger