As I write my blog, trying to stick to the Bit Part subject matter, I find myself looking at some great movies and choosing some of the smaller part actors to research.  Last night was no different.  TCM showed The Treasure of the Sierra Madre from 1948 starring Humphrey Bogart, Tim Holt and Walter Huston.

I felt angered and sorry that Mr. McCormick tried to cheat Dobbs and Curtin out of their hard earned wages after they worked for him.  (I guess that was what they wanted when they wrote the script.)  I think McCormick should have been more careful out in the open after he cheats people, but the lead characters had to get their money from someone.

His first movie was a silent in 1926 called The Quarterback.  He then had a part, probably just as an extra, in the Marx Brothers' classic, The Cocoanuts in 1929.  He worked in six films with Randolph Scott (1898 - 1987) starting in 1933, and five with James Cagney including one that Cagney only narrated in 1968 called Arizona Bushwackers.

He was in seven Torchy Blane films with Glenda Farrell (1904 - 1971).  I have to look those up!  I've never seen one, but I keep bumping into them in my research.  There were nine Torchy films in three years with three different actresses.  I wonder of TCM has them.

MacLane made six great films with Humphrey Bogart.  I am still trying to get out of the 1930s in his list on IMDb!  In the 1940s he had quite a few starring roles as well as being a popular supporting actor.  Can he be considered a Bit Part Actor for my purposes?  Not in those years.

In the 1950s we see him with Jimmy Stewart in The Glenn Miller Story (1954) as General Arnold.  In the early 1950s he also gets started in TV, which gave him a new career.  He wasn't a villain as much on TV, but started to play more comic roles. 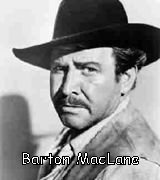 He did have a regular role in "Outlaws" starring Don Collier (b. 1928).  It is ironic that the TV generation will remember him best for his final recurring role on "I Dream of Jeannie" as General Peterson, which ended with his death in 1969.  I wonder how many Jeannie fans know of MacLane's other work and how good it was.

Looking through the career of Barton MacLane just shows how many other great movies and Bit Parts still need to be explored.
Posted by Bit Part Blogger