I just happened to bump into Mr. Smith Goes to Washington (1939) yesterday on Turner Classic Movies.  I didn't watch it because I have the DVD, but this is a movie that belongs in every classic movie fan's collection.

The scene I saw had Jefferson Smith was being sworn in as a senator.  There was an objection by another senator, played by Porter Hall (1888 - 1953).  I also remembered Hall in Miracle on 34th Street (1947) so I thought I would look him up.

Many westerns and many prison films follow.  Then he is a senator in Mr. Smith in 1939.  A comedy, His Girl Friday, and a western with John Wayne, Dark Command, in 1940.

In 1944 we see Hall in Double Indemnity with Fred MacMurray, Barbara Stanwick and Edward G. Robinson, and then in Going My Way starring Bing Crosby.  Miracle on 34th Street (1947) and Hall is the company psychologist, another bad guy trying to put Kris Kringle in a mental hospital.

It comes to mind that it would be a good thing to search out the lesser known films of some of these great Bit Actors.  In 1949 he was in Chicken Every Sunday with Celeste Holm (b. 1917), Dan Dailey (1913 - 1978), and Alan Young from "Mister Ed."  His next film the same year was The Beautiful Blonde from Bashful Bend starring (listen to THIS cast) Betty Grable, Cesar Romero, Rudy Vallee, Hugh Herbert and Sterling Holloway.  That has to be a good movie, but neither is available on DVD. 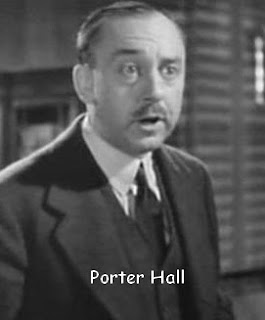 Some TV time started in 1950, and another E. G. Robinson film, Vice Squad in 1953.  Porter Hall had 79 roles on the screen and in TV.  The people he worked with were truly incredible.

A small complaint with the new IMDb.  I can't find a link to search for movies that include a pair of people in the credits.  I used that feature a lot.  If anyone knows where it went in the redesign, please send me an e-mail!  I did write to IMDb about the oversight.  Thanx!

(Update 2011-02) That feature on IMDb is present, but difficult to find.  Go to the Search link at the very bottom of the home page, then click on the link for collaborations.  Whew!
Posted by Bit Part Blogger