I particularly enjoyed seeing Andy Clyde (1892 - 1967) in a good supporting role.  I remember seeing Andy in a lot of early TV reruns and B-westerns when I was a child.

Andy was born in Scotland and was popular in vaudeville and music halls there, in the 1920s.  He came to America and started making silent films in 1921.  Not long after his debut he began working at Mack Sennett, and eventually had his own series of short comedies.  In his early silent days, his titles are not much to talk about, but he did get to work with Ben Turpin (1869 - 1940), Harry Langdon (1884 - 1944) and other greats.

Actually, some of the titles are quite humorous.  The Half-Back of Notre Dame, Scarem Much, Lizzies of the Field, and Riders of the Purple Cows all in 1924; Super-Hooper-Dyne Lizzies, Sneezing Beezers, and Dangerous Curves Behind in 1925, etc.  Some of these should be worth looking into.  Up until 1933, Andy Clyde made about 170 films at Mack Sennett.  With his good voice and Scottish accent, he easily made the transition to talkies.

My guess is that the two reel comedy was such a popular item, all the studios were cashing in with whoever they had on contract.  Of course, Charlie Chaplin, and Laurel and Hardy were the most popular. Educational Films Corporation of America had Andy's contract after he left Sennett.  Not exactly a good studio name for comedy shorts!

His formula for success was playing an old man of one sort or another.  His large mustache added character to this character actor.  He found another repeating role as one of Hopalong Cassidy's sidekicks, and he worked with William Boyd (1895 - 1972) in about 36 films in the 1940s, and then went on to Hoppy's TV series. 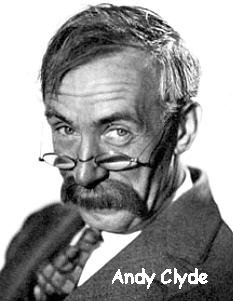 Andy worked in quite a few television shows, including some repeating roles in "Circus Boy," "The Adventures of Rin Tin Tin," "The Texan," "The Real McCoys," "No Time for Sergeants," and "Lassie."

He also never gave up on his comedy shorts and made them well into the 1950s.  It was a format that was dying, though.  Theaters were ending the full show presentation that had included a B-movie, a few cartoons, perhaps a newsreel, and a feature...and started showing just a feature film.  The features were getting longer, and money was getting tighter now that TV was taking some of the audience.

With 378 titles listed on IMDb, I think Andy Clyde had a wonderful career.
Posted by Bit Part Blogger