Beulah Bondi (1888 - 1981) is one of everyone's favorites when it comes to Bit Actors.  She started as a very successful stage actress on Broadway, and made her first movie at age 43, reprising her Broadway role in Street Scene (1931).

It must have been great being part of the new "Talkies."  Many silent stars were dimming due to voices that didn't match screen expectations, and that left openings for new stars.  It was a chance to work with Lionel Barrymore (1878 - 1954) and many other big names, establishing her reputation as someone you wanted to work with. 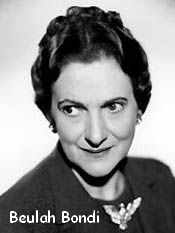 Also in 1952, Bondi started working on TV in some teleplays.  It also agreed with her and most of her later work would be on TV, with occasional movie roles.
Everyone, and I mean everyone, remembers her in her motherly roles.  She played Jimmy Stewart's mother in no less than FOUR movies, and also on TV in "The Jimmy Stewart Show" in 1971!  Most notably in the movies Mr. Smith Goes to Washington (1939) and It's a Wonderful Life (1946).

Sadly, at age 92 in 1981, she tripped over her cat and died of the resulting injuries.  Beulah Bondi had quite a career, and no one could doubt how much she added to the movies and TV shows she appeared in.  He last role was on "The Waltons" and she won an Emmy for her effort.