Asta was originally named Skippy, but after The Thin Man (1934) he was forever known as Asta.  IMDb lists eight titles for Asta, but that has to be incorrect.  The final title is "The Thin Man" television series in 1958, and Asta would have been 26 years old.  Not possible for a wire haired terrier.

A look at Wikipedia shows a more logical glance at his professional career.  Asta probably appeared as an extra in several films before hitting it big.  They also note that one of Asta's trainers was Rudd Weatherwax (1907 - 1985), who made Lassie (or Pal) famous.

Asta also appears in Bringing Up Baby (1938) working with Grant again, and also with Katherine Hepburn (1907 - 2003).  Then, the same year, he appears in Topper Takes a Trip, with Constance Bennett (1904 - 1965).  That was a curious entry in the Topper series, as it was absent the George Kirby character.  I must look into that!

Asta's character appears in six Thin Man movies, but Skippy is only in the first two.  There is an interesting quote from an article in The American Magazine in 1938 - 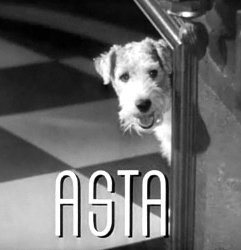 "Skippy, a smart little wire-haired terrier, is one of the leading stars in pictures. He leads a glamorous life—a dog's life de luxe. He is rated as one of the smartest dogs in the world, and when contracts are signed for his appearance in a picture he gets $200 a week for putting his paw-print on the dotted line. His trainer gets a mere $60."

Asta's antics in The Thin Man and After the Thin Man have endeared him to dog lovers for decades.  Another line from the magazine article said, "Treat a dog kindly and he'll do anything in the world for you."  Our wonderful dog Sadie has shown us that.  My wife and I rescued her and she has turned into a loving pet.

After the Thin Man also has Mrs. Asta, and is probably the best of the series.  Who needs a murder story when you have talented dogs!
Posted by Bit Part Blogger