Robert Pastorelli (1954 - 2004) was a tough character actor.  I remember him for his comic portrayal in Eraser (1996) as a bartender in a gay bar, after Arnold Schwarzenegger (b. 1947) got him into the witness protection program.  He wasn't gay, and his best line was when he said, "I'm the king of Bayonne" in his natural accent.

Pastorelli was a boxer and a drug addict before he cleaned up his life and took up acting.  He started working on TV, and he made a good living in movies as well.  His first substantial role was as the mule teamster in Dances with Wolves (1990), but he had earlier roles in several good movies with some big stars.  Look for him in Outrageous Fortune (1987) with Bette Midler, and Beverly Hills Cop II (1987) with Eddie Murphy.

After he was in Dances, more good movies followed.  In 1993 he appeared in Striking Distance with Bruce Willis, and Sister Act 2: Back in the Habit with Whoopi Goldberg.

Pastorelli's persona was so strong that he could remain in demand in Hollywood.  He looked like a boxer, and had a great North Jersey accent that fit in with so many movies.  Plus, he could easily inject humor into his part that could be used to broaden his popularity with fans...and casting directors.

After Eraser, he was in Michael (1996) with John Travolta, and even made the musical "South Pacific" for TV in 2001 starring Glenn Close. 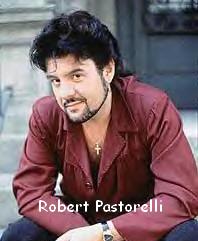 Pastorelli may have had more success on TV.  Even in his early career he appeared on many great shows in the 1980s.  His biggest role was on "Murphy Brown" which ran from 1988 to 1994.  His last movie was released the year after his death, Be Cool starring Travolta and Uma Thurman.

At the end of his life, drugs had once again taken hold.  IMDb lists his death as an accidental heroin overdose.  Sorry, if you are shooting heroin, there is nothing accidental about it.
Posted by Bit Part Blogger