I must admit, I made a big mistake when I tuned in the 1986 slasher movie, Cobra, over the weekend.  I thought, it's a Stallone movie, he made Rocky in Philly, how bad could it be?  The answer is, pretty bad.

Sylvester Stallone (b. 1946) made Cobra the year after Rambo II and Rocky IV.  I guess the sequel thing should have told me to stay away.  Everybody knows that sequels are never as good as the first story.  Of course, Cobra wasn't a sequel, but maybe somehow he got stuck in sequel mode.

Cobra is about a cop who's duty is to clean up when no one else can handle the job.  There is a night slasher loose, with a gang of creeps who carry axes.  When they aren't slashing people at random, they stand on a sound stage and clink their axes together in time with the music.

Let's look for something good in the Bit Part cast.  One intended victim is Brigitte Nielsen (b. 1963).  Nielsen is a model and actress, having 32 titles listed on IMDb.  She is a good place to start because she is very pretty.  She's also a pretty good screamer, which is necessary for a slasher movie.

Her first movie was Red Sonja (1985) where she gets to fight Arnold Schwarzenegger.  It was a draw.  Her next film was, you guessed it, Rocky IV.  She was the Russian boxer's (Dolph Lundgren) wife.  She loses.  Next came Cobra and in 1987, Beverly Hills Cop II.  Oh no, another sequel.  It was all downhill from there for Brigitte.

The lone bright spot was Stallone's sidekick, Reni Santoni (b. 1939).  A typical cop actor, Reni has 96 titles on TV and in movies.  He fit the part well, but he couldn't overcome Stallone's overacting. 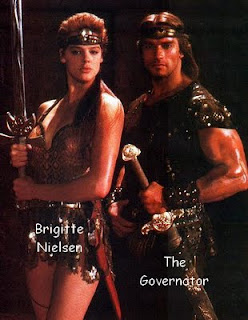 Thompson is not a bad actor in reality.  He has over 80 titles listed, and his range is better than you would expect for a guy who started out as a slasher and a punk.

Cobra is a movie with a message, and the message is...Beware.  I didn't want to lead you to this movie, so I put a link to Amazon for a better movie.  There will almost always be something better on TV, so please change the channel, unless it is Red Sonja which was almost as bad.  I can't believe I watched the whole thing!
Posted by Bit Part Blogger