I was watching one of my new, favorite channels the other night, Encore Westerns.  Great westerns and lots of old TV shows, and no commercials.  What's not to like?

"Gunsmoke" came on.  And then there was a scene with Sam the bartender.  It brought back a flood of memories.  Many years ago I remember looking up who played Sam.  Glenn Strange was the name, and I remembered he was also a Frankenstein monster in some movies.  Time for more research on this outstanding Bit Actor.

Glenn Strange was born in 1899.  He taught himself how to play fiddle and guitar and started entertaining by the age of 12.  He was also a rancher and a cowboy.  In the 1930s he became a western singer on the radio, and then moved into movies.

Glenn started working on soundtracks, filling in the background music for early western talkies.  He soon found himself in front of the camera as an extra and in bit parts.  His size helped him get on screen.  He stood close to 6 1/2 feet tall, and was sometimes billed as Peewee Strange in his films.

B-Westerns were all the rage in the early talkie days.  They were so popular, that many actors preferred to work in the lower stress atmosphere of making these six-reelers.  Feature films were more expensive, and if they bombed, the studio heads wanted to know why.  Plus, you could act in several of them while a feature look longer to make.  Many actors were paid by the picture, not the hour, so if you were in demand, you could make more money by making more films.

While the vast majority of these Strange films were westerns, Glenn did play in a few war films and made a good showing in horror flix.  In 1941 he appears in Playmates, starring Kay Kyser and his orchestra, John Barrymore, and the fetching Lupe Velez (1908 - 1944), playing an 'actor in a western film.'

By the mid 1940s, Boris Karloff was getting tired of donning the Frankenstein monster makeup.  In 1944 Karloff appears as Dr. Gustav Niemann (a name I won't remember) in House of Frankenstein, with Glenn Strange playing the monster.  It was strange that Strange looked strangely like Karloff, which led to him getting the part.  And at his height, he probably didn't need the platform shoes that Karloff used.  Glenn would play the monster again in House of Dracula (1945) and Bud Abbott and Lou Costello Meet Frankenstein (1948). 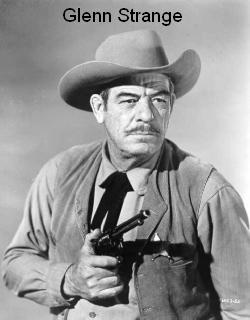 The 1950s brought television and the TV Westerns.  Glenn was ready.  He was the original TV Butch Cavendish in "The Lone Ranger" series, and was seen in many television western series' as a guest star, over and over.  He was a stage driver on "The Rifleman" several times.

I wonder if he decided to settle down in Dodge City when he was hired by Miss Kitty at the Long Branch Saloon in 1961.  He stayed for a dozen years, and that was simply his most famous role.  "Gunsmoke" would make an impression on a whole new generation of fans for Glenn.  It did to me.  Good reason to watch House of Frankenstein again, and to go back and dig up some B-Westerns.

Glenn Strange has 311 titles listed on IMDb.  He died of lung cancer in 1973, just after retiring from tending bar.  He was never a big star, but he is an important Bit Actor who contributed his talent to so many worthwhile projects.  And that's not Strange at all.
Posted by Bit Part Blogger