A Tale of Two Chans

Let's compare Charlie Chan's two movie sons, Lee played by Keye Luke (1904 - 1991) and Jimmy (or sometimes Tommy) played by Victor Sen Yung (1915 - 1980).  Well, let's look at the actors, not the characters.  Both were Chinese/Americans and both had long, wonderful acting careers.  These days, I think they may be less remembered, except by classic movie fans like us.

Warner Oland (1879 - 1938) was the first, major Charlie Chan in the movies.  He made Chan films starting in 1931, up until his death.  Oland was also the first of a long line of Chans who were not Asian.  His real name was Olund and he was Swedish.  Keye Luke played "Number One Son" Lee Chan.

Luke started working in film just a year before his first Chan movie, Charlie Chan in Paris (1935).  Eight of Oland's 16 Chan movies also included Luke.  Luke played Lee Chan in one oddity, Mr. Moto's Gamble (1939) which started out as another Chan movie, until Oland couldn't continue.  The studio brought in Peter Lorre and converted it to a Mr. Moto/Charlie Chan hybrid.

The Charlie Chan series was very popular with the public and served as a great start for Keye.  He found himself in demand wherever an Asian actor was needed.  His first big role outside of Chan was in The Good Earth in 1937, and he played the first screen Kato in The Green Hornet in 1940.  No matter that Kato was supposed to be Korean.

Luke then played a doctor in the Lionel Barrymore, Dr. Gillespie series.  Five entries in all.  The late forties brought him once again to play Lee Chan, this time with Roland Winters (1904 - 1989, note that they were the same age) as his Pop.  BTW, Winters was born Roland Winternitz in Boston, MA...another non-Asian Chan.

The 1950s brought television and more opportunities.  Luke embraced TV, and also did voice work for animation and dubbing foreign films.  He was in everything from "My Little Margie" to "Star Trek."  In 1972 he finally got to play Charlie Chan in "The Amazing Chan and the Chan Clan," and was probably the first Asian to do the lead in a major work, even if it was animated.

Keye Luke will be remembered by younger viewers as Master Po in "Kung Fu."  His newer movies include Gremlins (1984) and his final film, Alice (1990) by Woody Allen.  He has 200 titles listed on IMDb.

Victor Sen Yung also has a long career with 151 titles.  His first film was The Good Earth in an uncredited part.

Victor was Tommy Chan in five Chan movies starring Roland Winters.  One of those also included Keye Luke, The Feathered Serpent in 1948.  The two would work together in eight other films and numerous TV shows, including "Kung Fu." 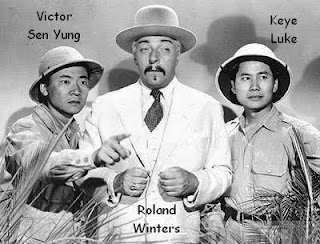 Sen Yung also worked on many TV shows.  He continued in film and you can see him in The Left Hand of God (1955) starring Humphrey Bogart, the musical Flower Drum Song (1961), and The Hawaiians (1970) with Charlton Heston and Keye Luke.  His final film was Sam Marlow, Private Eye in 1980, starring Robert Sacchi (b. 1941) who is mostly known as a Bogart look alike.

I have always enjoyed watching Keye Luke and Victor Sen Yung.  They are both instantly recognizable on screen, whether large or small.  But they will always be best remembered as three of Charlie Chan's sons.  Or is that, the sons of three Charlie Chans?
Posted by Bit Part Blogger