Weaver started acting in television in the late 1950s.  His first film was Fail Safe (1964) where he played a colonel.  There were a lot of colonels in that one.  Weaver's deep voice and great facial expressions of terror, disgust or horror help him to stand out.

He was very active on TV through most of his career.  You can find him on most of the dramatic and western series, including "Rawhide," "The Fugitive," and "Combat."

To put him back in his element, Fritz appeared multiple times on "The F.B.I." and "Mission Impossible" over the years of those well received shows.  It suited Weaver.  As did most dramatic or suspense roles.

A year after appearing in 1977 on "The New Adventures of Wonder Woman" he has, perhaps, his best television role.  He plays Dr. Josef Weiss on the TV mini series "Holocaust." 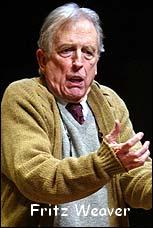 Weaver appears in one segment of Creepshow (1982) which is a very interesting, and campy, horror flick by Stephen King (b. 1947).  The cast includes Hal Holbrook, Adirenne Barbeau, Leslie Nielsen and E. G. Marshall.  I loved it!

His final film was the 1999 remake of The Thomas Crown Affair starring Pierce Brosnan and the wonderful Rene Russo.  I thought that version held up well in comparison to the 1968 Steve McQueen version.  That sort of comment always causes a reaction from the public.  I do love McQueen, the King of Cool.

Fritz continued to work on the TV series, "Law & Order" up until 2005.  He is now 85 years young, so I hope he has the health to continue appearing in roles, even if they are small ones.  His voice can be heard on many History Channel documentaries, so Fritz Weaver will be around for quite a while.
Posted by Bit Part Blogger