I bet everyone has seen Denver Pyle (1920 - 1997) in something on TV.  He has over 250 titles on IMDb, and that doesn't include the multiple times he appeared in the same series'.  He goes back a bit further, though.  Let's take a look.

Pyle always seemed to play a slow, southerner with a great, gruff, drawn out speaking style and the ever-present coveralls.  He started acting on the big screen in 1947, after doing some theater.  His first film was The Guilt of Janet Ames, starring Rosalind Russell, Melvyn Douglas and Sid Caesar.

In 1950 he was in Vaughn Monroe's  (1911 - 1973) first film, Singing Guns, about a thief who shoots and then saves a sheriff and then becomes his deputy.  I'll have to look for that one.  I like Vaughn Monroe, and he only acted in two films.  The same year, Pyle was in The Flying Saucer, and early attempt at a classic Sci-Fi theme.

His early career wasn't much to talk about, so I am glad he gave television a try.  He appeared in many early western series, and drifted into other roles, including "Ramar of the Jungle" and "Commando Cody."  I think, being born in Oklahoma and working on a ranch, he was happiest in westerns.

In 1957 he appeared in The Left Handed Gun with Paul Newman, and Jet Pilot with John Wayne.  He was starting to be noticed.

Pyle's best work happened after 1960, when he joined up with Wayne again in The Alamo and The Man Who Shot Liberty Valance (1962).  There were regular parts on "The Life and Legend of Wyatt Earp," "Have Gun - Will Travel," "Zane Grey Theater," "The Rifleman," "Cheyenne," "Death Valley Days," and "Laramie."  He even shows up as Uncle George on "The Dick Van Dyke Show."

I remember him as Briscoe Darling on "The Andy Griffith Show."  The Darling clan was in about six episodes as a mountain family with a flair for bluegrass music.  Those were the days!

In 1964 he appears in John Ford's last western, Cheyenne Autumn, and in 1967 he gets to spit in Faye Dunaway's face in Bonnie and Clyde.  Pyle's last movie with The Duke was Cahill U.S. Marshal in 1973. 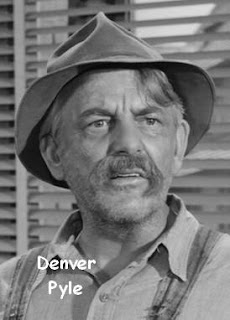 According to one writer in the IMDb trivia pages, Denver Pyle was almost cast as Matt Dillon for "Gunsmoke."  James Arness did a fine job with that role, and Denver appeared on at least 14 episodes.  The two of them had worked together once before, in The Lone Hand in 1953.

In the 1970s, Pyle is getting more into his crotchety old man days.  His two most famous roles are probably for "The Life and Times of Grizzly Adams" and "The Dukes of Hazard."  His final movie appearance was in Maverick (1994) as an old gambler on the riverboat.  The riverboat scene in that movie is a great place to spot all the old western stars.

Over the years, Pyle worked in six Audie Murphy films, and six with John Wayne.  He also worked with many of the later B western stars, like Tim Holt, Bill Elliott and Allan 'Rocky' Lane.  Denver Pyle is a Bit Actor who added a lot to movies and television.
Posted by Bit Part Blogger