There are many names that shine when you think of silent movies.  Buster Keaton (1895 - 1966) is certainly one of them.  But he was not always a star.  In fact, his star shown brightest for only a few years in his long acting career of over 150 titles.

Keaton started acting at age three in his parents' vaudeville act, along with partner Harry Houdini (1974 - 1926).  From what I have read, it was a tough act for Buster, who was physically mistreated on stage in the act, in search of laughs.  He took all the punishment, and always came up with his stone face in the end.  A trait he never lost.  His father's problem with alcohol finally ended the act, and I hope it was before Buster was seriously injured. 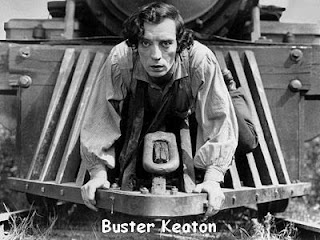 Keaton took second billing (or lower) to Fatty in many of these early films.  But he also was a writer and director for some of them.  In 1920, Keaton gets top billing in the short film, One Week.  His first feature length film, The Saphead, was released the same year.

Shortly after that, Arbuckle fell into legal troubles that ended his acting career, but Buster was off and running.  1920 to 1929 would be his finest decade.

In many instances, silent film stars would lose their glow with the advent of sound films.  This was not the case with Buster Keaton, but he declined none-the-less.  His many personal problems led to drinking.  He moved to MGM, and lost his creative control, which deepened his depression.

By 1940 he was in his third marriage, this time to Eleanor Norris (1918 - 1998) who is credited with helping Buster end his drinking so he could get some work.  His movie career continued, but he would never be a big star again.  He had many small appearances in great films such as In the Good Old Summertime (1949), Sunset Boulevard (1950), and Limelight (1952).

After growing up watching old Buster Keaton two-reelers on television, I was pleased to see him in It's a Mad, Mad, Mad, Mad World (1963) with the greatest comedy cast ever assembled for a movie.  He belonged in that film, and even at age 68 he still had his screen charm and his ability to play a physical part.

Keaton also found some television work, but he was misplaced in Beach Blanket Bingo and How to Stuff a Wild Bikini, both in 1965 with Annette Funicello.  His final film was A Funny Thing Happened on the Way to the Forum (1966) starring Zero Mostel, Phil Silvers and Buster Keaton.

Keaton's huge house in Hollywood was purchased by James Mason, and Mason found a treasure trove of Buster's old nitrate films in a hidden closet.  Luckily Mason knew these films were important and he made sure they were preserved for us to enjoy.

That's quite a story about one of the greatest silent movie stars, who became a wonderful Bit Actor.
Posted by Bit Part Blogger