Eddie Jones and The Rocketeer

I watched The Rocketeer (1991) the other day.  It is a movie my kids always liked, and it has some great nostalgia mixed in to a comic book story about an aerobatic pilot in the late 1930s who finds a rocket pack and flies off to save his girlfriend and the world from the Nazis.  It may not appeal to everyone, but I never met a movie I didn't like.

If you are a classic film buff and haven't seen this film, it is worth the time.  You will no doubt recognize a character made up to look like The Hoxton Creeper from the Basil Rathbone/Nigel Bruce Sherlock Holmes film, The Pearl of Death (1944).  The Creeper was played by Rondo Hatton (1894 - 1946) and he reprised the role in House of Horrors, released in 1946.

Hatton made only 22 films before a fatal heart attack took him.  His appearance, that garnered him the role in Pearl, was due to the disease acromegaly, which disfigured him into the Creeper.  It is thought that Abraham Lincoln, and another Bit Actor named Andre the Giant (1946 - 1993), also suffered from acromegaly. 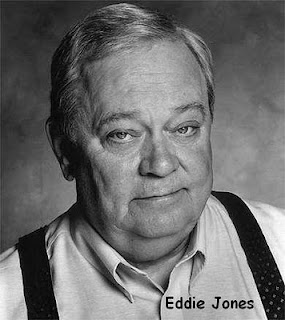 In The Rocketeer, the Creeper part was called Lothar and was played by 7' tall Tiny Ron.  Ron has only 19 titles listed on IMDb.  But I think there will always be roles for a 7' Bit Actor!


A face you will probably recognize, but may not know the name, is Eddie Jones (b. 1937).  Jones played Malcom, who worked at the airfield and helped at the air shows. A year later he played Marla Hootch's father in A League of Their Own.


Jones stared out in acting slowly, but kept up a good pace.  He is in Trading Places (with Eddie Murphy and Dan Aykroyd) in 1983 as Cop #3.  He had recurring roles on television in "The Equalizer" and "Dark Shadows," and later as Jonathan Kent on "Lois and Clark: The New Adventures of Superman."  He had a regular part in "The Invisible Man."


The only other thing I want to mention is the music of The Rocketeer.  It is fabulous.  Of special note is the torch singer, played by Melora Hardin (b. 1967) at the South Seas Club.  She isn't listed in IMDb as a singer per se, so I am not sure it is her voice, but it was perfect.  I wish there were still clubs like that.


As far as the stars of The Rocketeer, I think they may have taken it a bit too seriously.  Timothy Dalton (b. 1944) especially.  But I think Dalton always takes his roles too seriously.  Terry O'Quinn (b.1952) played Howard Hughes, and he was very good in the part, even though it was very small.


If you haven't seen it, SEE IT!
Posted by Bit Part Blogger