I happened to catch Chinatown (1974) on TV this past holiday weekend.  This is a great Jack Nicholson, Faye Dunaway movie, made in the style of a 1930's murder mystery.  Lots of twists and turns to keep you thinking.  More movies should be made this way.  It is easy to watch.


I also saw the new Green Hornet (2011) movie, starring Seth Rogan.  It is the very antithesis of what could be called a classic film.  Rogan is severely mis-cast as the hero.  He would look more at home remaking Animal House (1978).  Plus the quick cuts in every action sequence makes it impossible to follow which car is being wrecked and who is being injured/killed.  Don't waste your time on that one.

Back to Chinatown.  Early in the film Mayor Bagby is talking about a reservoir project, and I knew I had to write about him.  Roy Roberts (1906 - 1975) is a face that everyone who has ever watched TV or been to the theater has seen.


Chinatown was his second to last film.  He ended his movie career in 1975's The Strongest Man in the World, starring Kurt Russell.  (Chinatown was better with ten Oscar nominations and a win for Best Writer, compared to Strongest's no Oscars or nominations for anything.)  The funny thing is that he was 68 years old when he made Chinatown, but he looked the same at least ten years earlier as Admiral Rogers on "McHale's Navy."

Roberts' first major film was Guadalcanal Diary (1943) starring Preston Foster, Lloyd Nolan, and William Bendix.  Of course, there were loads of war movies turned out in the 1940s, and Roy was in many of them.  His next film was The Fighting Sullivans (1944).

In 1946 he was in My Darling Clementine as the mayor.  It was his only time working with director John Ford.  Before moving to television, he made so many films with so many stars that it would be difficult to pick the best, or even to do enough research to find his larger parts.  He lists close to 200 titles on IMDb. 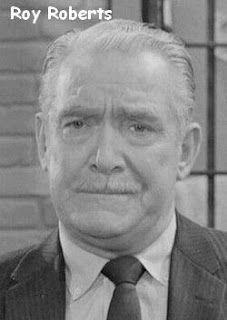 It was interesting that he could go from a co-starring role in one film to an uncredited role in his next.  A true sign of a great Bit Actor.


Roberts' television work started in the early 1950s and it agreed with him.  His first regular role was "My Little Margie" but he appeared as a player in many shows before that.  He did teleplays and spots on series' but rarely more than three times.

He hit it big as Captain Huxley on "The Gale Storm Show" appearing in over 80 episodes.  He went on to have regular parts on "McHale's Navy," "The Beverly Hillbillies," "The Lucy Show," "Bewitched," Petticoat Junction," and "Gunsmoke."  I also saw him in a "Gunsmoke" episode this weekend.

I think we will be seeing Roy Roberts' face for many years to some.

What films did you watch over the Thanksgiving weekend?  And which Bit Actors did you see?
Posted by Bit Part Blogger