A quick commercial before we get to Diane and family.  Please stop by The Lady Eve's Reel Life all this month for a Reel Treat.  Eve has put together a month of blog posts on Alfred Hitchcock's great movie Vertigo (1958).  Eve has invited ten guest writers to participate.  I was asked to give all of the Bit Actors my usual treatment, and I am sure every post is worth reading.  Don't miss it!

Diane has 123 titles listed on IMDb and was married, for a while, to Bruce Dern (b. 1936).  They produced Laura Dern in 1967, and Diane has made several movies with her daughter.

I must admit that I am unfamiliar with most of her movie work before 1970.  Things seemed to perk up in the mid 1970s though.  She was in White Lightning (1973) with Burt Reynolds, Chinatown (1974) with Jack Nicholson, and received her first of three Oscar nominations for Alice Doesn't Live Here Anymore also in 1974.  That nomination led to a role on the TV spin-off, "Alice."

She was finally getting some starring roles after working very hard for the opportunity.  We won't talk too much about Embryo (1976) a sci-fi/horror flick with Rock Hudson.  She also stars in a few better movies, All Night Long (1981) with Gene Hackman and Barbra Streisand, and with Jason Robards (1922 - 2000) in Ray Bradbury's Something Wicked This Way Comes in 1983, which also featured Royal Dano.  He's one of my favorites. 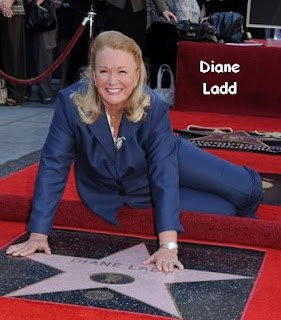 Ladd then takes a few cruises on "The Love Boat" and shows up with John Randolph (1915 - 2004) as Chevy Chase's parents in Christmas Vacation (1989).  Two more Oscar nominations followed for Wild at Heart in 1990 and Rambling Rose in 1991.  In those two movies, she played her real daughter, Laura Dern's, mother.  Laura was also in Alice Doesn't Live Here Anymore, but she was just seven years old playing a bit part.

Not all went well, though.  In 1993 she starred in Carnosaur where she plays a scientist bent on destroying everyone on Earth with a virus.  No Oscars for that one.  Better movies followed in Primary Colors (1998) and 28 Days (2000).

Her last good role was in American Cowslip (2009) with ex-husband Bruce Dern.  She worked with Bruce in four movies, and with Laura in nine.

You can find Diane in the HBO comedy series "enlightened" playing mother and daughter again with Laura.  And she is still hard at work on new movies.  At only 80 years old, I think we will continue seeing her for a while.  And if you are in Hollywood, look for her star on the Walk of Fame, next to Bruce and Laura's.  In 2010, they were the first family to be awarded stars together.
Posted by Bit Part Blogger