B4 They Were Stars - William Shatner

Yes, he was once not a star. William Shatner (b. 1931) made some good stuff before leaving the Earth to take command of the Star Ship Enterprise on the original "Star Trek" series in 1966.

Everyone knows he was born in Canada and started acting on the stage and in early television. His first appearance on screen was in a movie called The Butler's Night Off (1951). It has been described as forgettable with "...no entertainment value..." But it was work.

The Shat (I didn't make that up) worked in Canadian television, and in 1953 appeared in "Space Command" along with his future Chief Engineer James Doohan (1920 - 2005), the first time they worked together. The next year Shatner is on "Howdy Doody," and he appears in some episodes of "Encounter" with Patrick Macnee (b. 1922) of "The Avengers" fame. 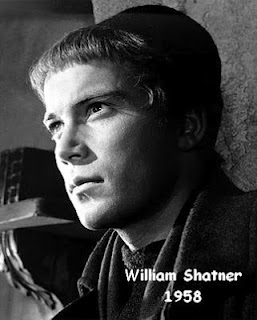 His next film was Oedipus Rex (1957) a Canadian production starring Douglas Campbell (1922 - 2009) where Shatner was in the chorus. In 1958 he has a much bigger break and co-stars in The Brothers Karamazov with Yul Brynner (1920 - 1985). That film was made by MGM and is all American...except for it being a Russian theme with Brynner who was also Russian.

Back to television, where Shatner is starting to find a home.  We are still in the late 1950s and he has guest spots on "Suspicion," "Climax!," "Playhouse 90," "Kraft Theater," and "The United States Steel Hour." He also appeared a few times on "Alfred Hitchcock Presents" and "One Step Beyond," and also in "Thriller" hosted by Boris Karloff.

I would say that 1961 was Shatner's best pre-Trek film year. He stars in The Explosive Generation as a teacher, with Patty McCormack (b. 1945) and Beau Bridges (b. 1941), and then appears in Judgement at Nuremberg with Spencer Tracy, which I believe is his first role as a captain (but not of a star ship).

His next film was The Intruder (1962) a Roger Corman production about integration in the South. Probably not a great film, but it was work and star billing. Also in the early 1960s you will find Shatner in his most famous "Twilight Zone" episode, "Nightmare at 20,000 Feet" plus one previous appearance on that series. Shatner was on all of the popular television suspense shows, including "The Outer Limits." 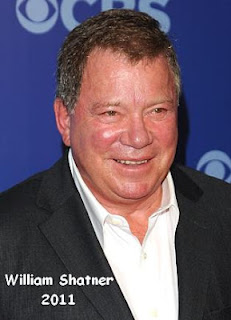 Do you remember the 1963 hit movie of Tab Hunter and Frankie Avalon called Operation Bikini? Bill Shatner was the narrator.

Next there were a few regular roles on several TV shows.  Look for Shatner in "77 Sunset Strip," "The Defenders," and "Dr. Kildare." He even starred in a one season series called "For the People."  He has some addition guest spots on "Route 66," "Burke's Law," "The Man from U.N.C.L.E.," "Gunsmoke," "The Fugitive," and "Twelve O'Clock High." That's not a bad way to make a living.

There was one more film before Gene Roddenberry cast him in his defining role. Incubus (1966) was a horror film made entirely in the forgotten language of Esperanto (for some reason). I think I'll pass on that one.

That brings us to 1966 and Star Trek's five year mission to explore strange new worlds. The mission only lasted three years, but look at what it started.