The name Stuart Whitman sounds familiar, and the face is familiar, but he was not really a star. Maybe I am connecting with the word Stuart, which could also be Stewart, and then there was James Whitmore, but he isn't Stuart Whitman. Enough babbling....

Our topic today is Stuart Whitman (b. 1929), an actor with 185 titles listed on IMDb. Anyone who played on "Fantasy Island" seven times must have had a good career as a Bit Actor.

Stuart began acting in college and spent some time on stage. His first film was When Worlds Collide (1951) a sci-fi melodrama starring Richard Derr (1918 - 1992). Science Fiction had to start somewhere and this was a prime example of an early attempt at adding some science to the more or less fantasy films that preceded it. Alas, he was uncredited in the film as a 'man by bank during riot instigation.'

His next film was much better, but his part wasn't. He was a sentry in The Day the Earth Stood Still (1951), the classic sci-fi film starring Michael Rennie (1909 - 1971). It is still one of the best films ever made, but you will be hard pressed to find Whitman in it. There were a lot of sentries.

In the early 1950s Whitman begins working in TV as well as films. There are no real highlights in his career, but I will try to find some! 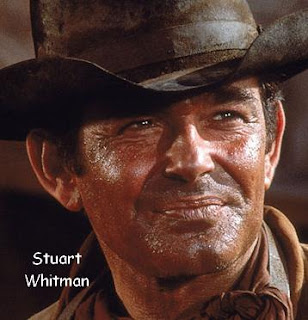 His own TV series came in 1967. It was called "Cimarron Strip" and it only lasted one season. He continues to work, but his star is dimming by this point.

He stars in Night of the Lepus (1972), a movie about mutant rabbits terrorizing a town. Not a big hit. And a lot more TV work and lesser movies continue to make some income for Stuart. He makes his way to "Fantasy Island" in the late 1970s, and in the late 1980s and early 1990s he appears on "Murder, She Wrote," "Knots Landing," and "The Adventures of Superboy."

Stuart Whitman's final appearance was in a TV movie called "The President's Man" (2000) starring Chuck Norris. Whitman's career may not have been stellar, but he did well, and apparently invested his money wisely. As with most Bit Actors, he did a lot for the movies he did not star in, bringing color and background to the story. Another true, Bit Actor.
Posted by Bit Part Blogger