Lots of great events are coming up this spring in the Southeast Pennsylvania area. Here is a quick look at some, and also additional thoughts for the day.

2012 is the 70th anniversary of the release of Casablanca (1942), one of the greatest films ever made, and THE greatest romance film. Turner Classic Films has put together a screening of Casablanca at theaters around the country to celebrate the event. There will be one (sometimes two) showings on March 21, 2012 at a theater near you, but only on that date. 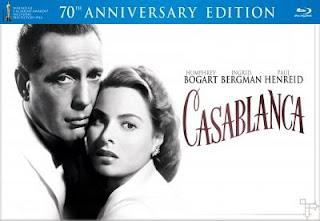 Robert Osborne will present a behind the scenes look at the film, which promises to be well worth seeing. This is your chance to see Casablanca on the big screen. More info can be found here and you can also pre-order tickets at that link. I already have mine! I hope Victor Laszlo and his wife Ilsa make it to Lisbon this time.

The Two Tars Tent of the Sons of the Desert will hold their next banquet on Friday, April 20, 2012. We will have as our guest Pretty, Perky Peggy King, which is what George Gobel used to call her.  Peggy was a singing star on Gobel's TV show, and also appeared in such great films as Abbott and Costello Meet the Mummy (1955) and Zero Hour (1957).


Two Tars banquets are held at The Cannstatter Club in Northeast Philadelphia, and event details can be found at the Two Tars Oasis 14 web site. The food is great, the entertainment is fun, and the bar is close by.

Peggy will talk about her career and maybe sing a few songs for us. She has some stories about her friends, Liberace, George Gobel, and Abbott and Costello to share.

We will also be showing Blotto (1930), one of the funniest Laurel and Hardy shorts ever made. Blotto also features Anita Garvin as Stan's wife. This event is an intimate gathering of movie buffs, not fans, and a great opportunity to learn about the movies, while having a good time.

Then, on May 12, 2012, we will celebrate the 100th anniversary of the founding of the Betzwood Studio and ranch of silent movie mogul Siegmund Lubin. Come to Montgomery County Community College in Bluebell, PA for the Betzwood Silent Film Festival. The Betzwood Ranch was the largest movie studio in the country in 1912. Lubin created some great westerns and other movies here, and the story of his rise and decline is interesting to any film buff.


A few years ago, Betzwood was featured on the PBS program, "History Detectives," to find info about some photos of the studio. The show is available on the PBS web site, and offers some great background on Lubin and Betzwood if you want to attend the festival. Click this link to go to that show.

Professor Joseph Eckhardt is the driving force behind the festival and will introduce the films. Talented organist Don Kinnier is amazing as he accompanies the films. And once again, the theater at the college allows an intimate experience where you can approach Prof. Eckhardt and Mr. Kinnier for a chat.

The Betzwood Studio was sold by Lubin in 1917 and later produced the Toonerville Trolley series before closing forever in 1923.


The Philadelphia area was not only the starting point for the USA, but also one of the starting points for the movie industry. If you are interested in this kind of history, I suggest you look for Prof. Eckhardt's book, King of the Movies: Film Pioneer Siegmund Lubin. And bring it to the festival for an autograph!

I'll be at all three events. Look for me at a table near Sam, the pianist. I'll be drinking a Cointreau.
Posted by Bit Part Blogger