There are some ethnic actors who make a very long career as Bit Players. James Hong (b. 1929) is one of them, and his career is worth looking at. He lists 368 titles on IMDb from 1955 to the present.

After deciding on an acting career, Hong wasted no time. He has used his ethnicity to his advantage, though he was born in Minnesota. His roles tend to be Asian characters, and he can easily turn on an accent if needed. I doubt that he would ever allow himself to be used in a stereotypical role, as many early ethnic actors did in the 1930s and 1940s.

One of his earliest parts (uncredited) was in Love is a Many Splendored Thing (1955). That movie starred William Holden and Jennifer Jones, with Jones played a Chinese doctor. There must have been plenty of Asian actresses who could have done that part! It's kind of like having 'chocolaty' chip cookies rather than chocolate chip cookies.

In 1956 he was tapped to help with the voiceover dubbing of Godzilla, King of the Monsters! He then started showing up whenever an Asian was needed on a TV show. In 1957-1958 he played No. 1 Son on "The New Adventures of Charlie Chan" to J. Carrol Naish's Charlie. Another non-Asian playing Chan.

He was available for major motion pictures that needed Asians. You will find him in Flower Drum Song (1961) during his extensive television work. Also in The Sand Pebbles (1966), and some not great films like The Bamboo Saucer (1968) about a flying saucer being hidden in a 'Red Chinese' village.

Also in the early 1970s we find Hong on quite a few episodes of "Kung Fu." And in 1976 he works with David Carradine again in Bound for Glory, a biography about Woodie Guthrie.

Hong was in Airplane! (1980) as a Japanese General. And by now he is playing the role of older men. In one of his better roles, he plays Lo Pan an ancient sorcerer in Big Trouble in Little China (1986). That's a good Saturday morning flick. And his other great movie from the 1980s, Blade Runner (1982), is a classic where he played the eye maker.

I recently watched Black Widow (1987), a murder mystery that was better than I was expecting. It stars Debra Winger and Theresa Russell. James Hong plays a drug-using private investigator who gets whacked by the 'widow.' So we will forgive him for being in Vice Versa with Judge Reinhold and Hot to Trot with Bobcat Goldthwait in 1988. 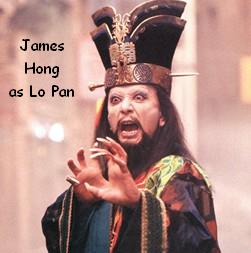 He worked with Nicholson again in The Two Jakes (1990), so I guess we also have to overlook all those martial arts films that needed Asian actors. They were the rage in the last few decades of the previous millennium.

I enjoyed The Shadow (1994) starring Alec Baldwin with Hong in a small role. It is a good version of a comic book, with some very good special effects and a gorgeous blonde named Penelope Ann Miller. Of course, Miller was just in The Artist (2011), which won Best Picture. I'll have to watch that one again.

He has also voiced some great animated films like Mulan (1998), Kung Fu Panda (2008), as well as television shows like "Super Robot Monkey Team Hyperforce Go!,' plus some work with Scooby-Doo.

Over all of those years, Hong has only received one major award. In 2007 he was honored by the Las Vegas Film Critics Society with a Lifetime Achievement Award. He was nominated for two Annies, for voicing the animated films Kung Fu Panda (2009) and Kung Fu Panda 2 (2011), as well.

With everything James Hong has done, and continues to do, I think he is really a star. But we will honor him here as a wonderful Bit Actor.
Posted by Bit Part Blogger