B4 They Were Stars - Marion (The Duke) Morrison

Everyone knows that John Wayne's (1907 - 1979) breakthrough movie was Stagecoach (1939), but he did a lot of work before that. His real name was Marion Morrison. and he was once billed as Duke Morrison in Words and Music (1929). Duke, of course, was his dog when he was a child.

Morrison was working as a prop man, part time, and he became friends with John Ford (1894 - 1973). His first few films were as an extra. Since he played football in high school and college, he made quite a few movies as a football player, including his very first screen appearance in Brown of Harvard (1926).

His next small job was in a King Vidor film, Bardelys the Magnificent (1926) starring John Gilbert (1897 - 1936). Of course these were not speaking parts, the films were silent, so no one knew John Wayne's voice yet.

Those early days would see Wayne in many films starring the big names of the silent era and early talkies. Lillian Gish, Victor McLaglen, Noah Beery, Myrna Loy, and even Stepin Fetchit. In 1928 Wayne made his first of 23 films with director John Ford, but still as an extra. It was around 1931, in Girls Demand Excitement that he started getting meatier roles with real billing.

The 1931 film, The Range Feud, starring Buck Jones (1881 - 1942) would be the first western in which John Wayne was a leading man. I wonder if he knew that would be his real claim to fame for the rest of his life. Do you think it was better to be a star in B westerns, or a Bit Actor in the A movies? 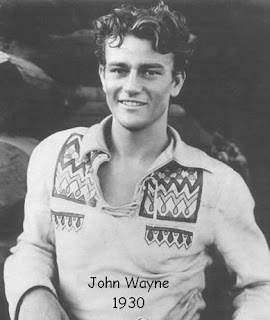 The first western I can find with John Wayne in top billing was Ride Him Cowboy (1932). In that film, Duke was the horse. Duke would go on to make six films with The Duke in 1932 and 1933.

Also in 1933 Wayne starred in Riders of Destiny as Singin' Sandy Saunders. Yes, the Duke was a signing cowboy, and one of the first. Only his singing was dubbed! Riders was also the first of 15 films that Wayne made with George 'Gabby' Hayes (1885 - 1969).

Mixed in with the westerns, sports films and action movies were still some dramas and comedies...where Wayne had to wear a suit. Look for him in Baby Face (1933) starring Barbara Stanwyck. But his real early success was just starting as he moved into making one B western after another. He made 46 films between 1933 and Stagecoach.

Stagecoach is #79 in Wayne's list of 172 titles on IMDb. Almost half of his screen career was over by the time he was really recognized as a star worthy of the best films. The Bit Actor was gone.

For all his fame, John Wayne only won a single Oscar, for True Grit (1969), plus two more nominations. His earliest nominations for any award came in 1950 for Sands of Iwo Jima (1949). But he had the lead in more films than any other actor and was one of the biggest money makers in film history. Seek out some of Wayne's early (Bit Actor) roles to see how he made his career a success.
Posted by Bit Part Blogger