Do you remember Denis Lawson (b. 1947)? He is a Scot who appeared in the first three releases of the original Star Wars trilogy, episodes IV, V and VI, where his name was misspelled as Dennis in the first two.

Acting must run in his family. His sister is producer Carol McGregor, who is the mother of Ewan McGregor (b. 1971) who played Obi-Wan Kenobi in the first three episodes of the Star Wars story.

Lawson does not have many movies in his filmography, which is a shame. He is talented and handsome, and would do well in America if he had more exposure. But, perhaps that is not what he is after. He is very well known in Great Britain, as a stage and television actor, and a comedian.

Of course, I first saw him as Wedge Antilles in Star Wars, Episode IV (1977). He was the leader of the Red Squadron that helped destroy the Death Star. He would play the same part in the next three S.W. releases, The Empire Strikes Back (1980) and Return of the Jedi (1983). Later, in 2001, he voiced Wedge for a video game.

I first noticed Denis in Local Hero (1983), which starred Burt Lancaster (1913 - 1994) and Peter Riegert (b. 1947). That was an interesting film, made in Scotland about a rich oil man, Lancaster, who wants to buy an entire town. Riegert is sent to Scotland to handle the negotiations. Lawson plays the hotel/pub owner who acts as the spokesperson for the town and authors a good deal for everyone. The magic happens as Riegert is taken in by the quaint location and the quirky nature of everyone he meets.

The Star Wars Trilogy was by far the biggest thing Lawson was a part of, but his part was so small, he was difficult to notice. There was just too much going on. You become aware of these details after viewing the films three or more times, unless you are specifically looking for someone and know where to look.

Most of Denis' work has been on British television and in films made specifically for British or European audiences. If you have access to BBC America on cable or FiOS, you can probably catch him in some of the series' such as "Robin Hood" or "Bleak House." It seems that BBC America isn't showing much other than "Top Gear" these days, but they throw other things in from time to time. 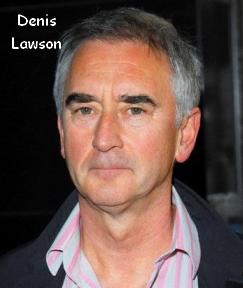 In 2011, Denis got to work with nephew Ewan McGregor in a British movie called Perfect Sense. I haven't seen it, but from all the movies listed on Denis Lawson's filmography, this one seems to be most interesting. In fact, every movie Lawson was in has received very good ratings on IMDb. That's a tribute to his skill, not only in acting, but in choosing quality projects.

Denis Lawson may only be a Bit Actor in Hollywood, but he is one more reason to wish I were British!
Posted by Bit Part Blogger