Now there's a name. Roscoe Karns (1891 - 1970) was a character actor (Bit Actor on this blog) who was most popular in the 1930s. The name Roscoe means Deer Forest, and the word roscoe is slang for handgun. Who would have thought! You don't hear that name much anymore. Maybe some classic film fans can start to bring it back into use.

Roscoe's first four films were made in 1915 at the Lubin Manufacturing Company studio, most likely in Arizona. Lubin went out of business in 1916 after a fire destroyed most of his films and business turned sour, so Karns moved over to the Christie Film Company in Hollywood. In 1919 he was in an early King Vidor (1894 - 1982) feature film called Poor Relations with Zasu Pitts (1894 - 1963). Karns would make three films with Vidor and four with Pitts.

The reason I include some of these obscure silent films in a Bit Actors background is because I think the early days of an actor's career help to form him or her into the acting style they adopt for the rest of their lives. They have experiences and talk with others in those movies. Who knows, Roscoe may have palled around with Eugene Pallette (1889 - 1954) and Charles Farrell (1900 - 1990) who were both extras in The Ten Commandments early in their careers. Perhaps Vidor or DeMille gave him a small piece of direction that stuck with him.

His first, really big movie was also the very first Best Picture winner Wings in 1927. The next year you could look for him in The Jazz Singer, the first successful talkie with dialog. Through the transition from silent to sound, Roscoe would continue to make both. It would be well into 1929 before we can finally say goodbye to most silent films. (Except for Charlie Chaplin, of course!)

In the decade of the 1930s Karns would make 64 movies with stars galore. He was in seven with Gary Cooper, six with George Raft, five with Neil Hamilton, four with Loretta Young and also William Powell. He was in a couple with Bette Davis, Clark Gable, Carole Lombard, Jack Holt and many others.

Perhaps his finest film was It Happened One Night (1934) the winner of five Oscars. In 1937 he gets the title role in Clarence, along with top billing. In the late 1930s we will see him in a few starring roles, but none of them were big movies. 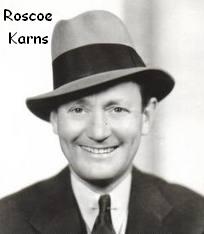 It seems by 1940 the roles are smaller for Roscoe. He is in His Girl Friday (1940) with Cary Grant, and They Drive By Night (1940) starring Humphrey Bogart and George Raft. Through the rest of that decade Roscoe would make mysteries, comedies, musicals, war movies, whatever came along. By then he was that versatile.

In 1950 he delves into television. Right off he stars in his own series, "Rocky King, Detective" which (according to IMDb) only made nine episodes that aired over four years from 1951 to 1954. But he also had a recurring role in "Hennesey" starring Jackie Cooper in the early 1960s.

You have to admit, that is quite a full career, from 1915 silent films to working with Paula Prentiss. Roscoe Karns was a good Bit Actor for sure.
Posted by Bit Part Blogger