I was watching one of my favorite things on Turner Classic Movies the other night, "TCM Extras." I sometimes find myself tuning in to TCM about 20 minutes before the next film is scheduled, just to watch for an Extra. I realize how much work it is to maintain a web site, but I do think Turner could do a better job of listing the wonderful short films they use as fillers between features.

They should also offer these great shorts in collections in their store. I searched the store for 'extras' and found E.T. The Extra Terrestrial (1982) and a series called "Extras" starring Ricky Gervais (b. 1961) that was on television a few years ago. No joy there either. 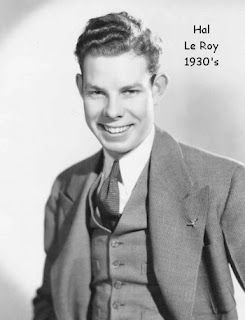 June is trapped in her apartment because she doesn't have the rent money, and Hal is a sign painter she can see from the window. Hal shows June what tap dancing is all about, and later returns to rescue her through the window. Before he comes back, June has a fantasy day-dream about a Scotsman on the new sign Hal just painted, and we enjoy a dance routine by the Gae Foster Girls. June and Hal then go dancing at the Sign Painters' Ball...all in 19 minutes, including a surprise ending.

Two-reelers like this are a load of fun, requiring no thought at all. Just sit back and enjoy. They should be required viewing at every movie theater, taking the place of some of the ads.

When this short started on TV, I thought I remembered Hal Le Roy's name. Sure enough, I had the pleasure of meeting Hal at a Son's of the Desert event in 1982. Since he never became a big movie star, he fits in perfectly here as a Bit Actor.

Hal Le Roy was a vaudevillian, and he played all over. He started dancing on the stage at age 15 and was an instant hit. He was popular through the 1930s at music halls including Radio City, and would occasionally get a dancing role in a movie. His film career was not as good as his Broadway or vaudeville work.

Hal only appeared in 22 films, mostly shorts, and a few television shows. His first feature was Wonder Bar (1934) starring Al Jolson (1886 - 1950), Kay Francis (1905 - 1968), and Dolores del Rio (1904 - 1983). Hal was in black face, but Jolson appeared that way many times. This film was released just a few months before the Hays Code censored anything untoward on the screen. With Dick Powell, Guy Kibbee and Hugh Herbert also in the cast, this is a film I want to see.

Le Roy's dancing style has been likened to Ray Bolger. Both were incredibly thin and seemed to be made of rubber. Hal did a great job of incorporating dance into the most unlikely stories. He was a washing machine salesman who excelled by dancing his sales pitch!

I don't remember much about my conversation with Hal or our time together. I did take his photo for you to enjoy. Hal passed away just three years after I met him.