I was e-mailing with another film blogger, and she happened to mention her favorite Bit Actor, S.Z. "Cuddles" Sakall, so let's see what we can find.  And Thanks to Brandie at The ABCs of Classic Film blog for a great suggestion and a great blog site.

I would venture to say that Cuddles Sakall is one of the better known bit actors, simply because of his role in one of the greatest films every made, Casablanca in 1942.  Carl the waiter at Rick's Cafe had an important role, not only setting the tone of the cafe, but also supporting Rick in everything he did.

Sakall was born in 1884 in Budapest, Austria-Hungary.  He made about 60 films in Germany, Hungary and England from 1917 to 1937, then there is a noticeable 3 year gap in his work.  His next film was called It's a Date in 1940, starring Deanna Durbin.  Apparently Cuddles left Europe as Hitler rose to power.  It is mentioned in the IMDb trivia that his three sisters died in Nazi concentration camps.

My guess is that his long resume of films in Europe was helpful in getting roles in Hollywood.  Over the next few years he worked with Robert Young, Olivia De Havilland, Jean Arthur, Alice Faye, Don Ameche, and in a larger role, with James Cagney in Yankee Doodle Dandy released in 1942 just before Casablanca.

After Casablanca he worked again with Humphrey Bogart in a war musical called Thank Your Lucky Stars in 1943, and in 1946 a "B" movie called Two Guys from Milwaukee included Cuddles, plus a cameo with Bogart and Lauren Bacall. 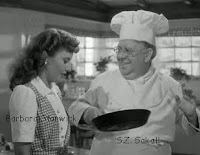 Another twenty films followed, including In the Good Old Summertime with Judy Garland in 1949 and Lullaby of Broadway with Doris Day in 1951.  His character was well defined over all those years and a total of over 100 films.  Can you imagine making a career out of one type of character?  Whether it was a waiter, a baker, a butler, or a grandpa, Cuddles Sakall always played the same character.

Cuddles left us in 1955 after having a heart attack.  Surely he was one of the best Bit Actors ever.
Posted by Bit Part Blogger