I might as well go back to one of the best films ever made, Casablanca from 1942, simply because of it's masterful use of bit actors to completely set the tone of the movie.  As much as an artistic director is responsible for designing sets to go with a director's idea of the story, bit actors and actresses create the feel and add color to the production.

Casablanca is full of great people to write about.  We covered Cuddles Sakall yesterday.  Dooley Wilson was the famous piano player/singer at Rick's Cafe Americain.  As everyone knows, he really couldn't play the piano (he was a singer and a drummer) but that didn't stop him.  He played an accordionist in his next film, Two Tickets to London in 1943, and a piano player again in 1949's Knock on Any Door, also with Bogart.  Dooley only made 19 films, but was popular on the stage.

Ludwig Stossel was always one of my favs in Casablanca.  He played Mr. Leuchtag who was preparing to leave for America with his wife.  They are having a drink with Cuddles, rather Carl the waiter, while practicing their English.  Leuchtag, "Vhat Vatch, liebchen?"  Wife, "Ten Vatch."  Leuchtag, "Such Vatch!"  I love it!  Then Carl says, "You will do beautifully in America."  Stossel played 130 roles, including Great Guns with Laurel and Hardy in 1941, and became the Little Old Winemaker in Italian Swiss Colony ads. 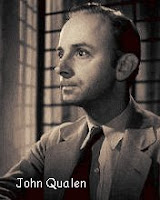 There are too many great stories in the cast list of Casablanca, so I will save some for later.  Or I guess I could just write all day!
Posted by Bit Part Blogger