Whatever Happened to Dorothy Comingore?

She was in one of the greatest films ever made, some say THE greatest film ever made, and had a fairly important role, too.  But her name is certainly not on anyone's list of great actresses, not even great bit actresses.

The film was Citizen Kane from 1941, and she played Charles Foster Kane's mistress and second wife, Susan.  Dorothy Comingore was born in 1913 and started in films in 1938, making 20 films before Citizen Kane.

Comingore's career started on the stage under the name Kay Winters, and she was "discovered" by Charlie Chaplin, but it does not appear that she ever worked with him.  She changed to her screen name Linda Winters for movies.  She didn't use her real last name until Citizen Kane.

Her first film was a musical two-reeler called Campus Cinderella with Penny Singleton.  She worked again with Singleton in Blondie Meets the Boss, the next year.

She took roles in movies that wouldn't make it to anyone's "A" list, including a pair of Three Stooges shorts, Oily to Bed, Oily to Rise in 1939 and Rockin' Thru the Rockies in 1940.  I guess it paid the bills.  She did manage to get a small part in Mr. Smith Goes to Washington in 1939 as a woman at the station.  Capra and Stewart..she must have thought she would build a wonderful future from that point. 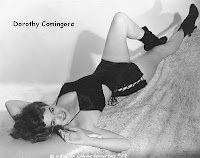 After Citizen Kane she had a good part in a 1944 film called The Hairy Ape with William Bendix and Susan Hayward, but she was very selective about the parts she accepted.  Perhaps the success of Citizen Kane clouded her perception of her popularity.
Two more films with minor roles, and a few TV appearances rounded out her 27 screen acting jobs.  In 1951 she was on the Hollywood blacklist, and in 1952 she refused to testify to the House Un-American Activities Committee.  It was a shame how America reacted to the "Communist threat" after World War II, but the career of this Bit Actress in movies and TV was over.  Dorothy passed away in 1971.
Posted by Bit Part Blogger