The new look on IMDb is taking some getting used to.  Things are in different places now.  Then, sometimes you get sent back to an old screen.  I guess they are slowly revamping it.

I looked up Jaws (1975) which was the all time highest grossing film, up until E.T.: The Extra-Terrestrial (1982) took that honor away.  In Jaws, there were a lot on basically unknown Bit Actors. 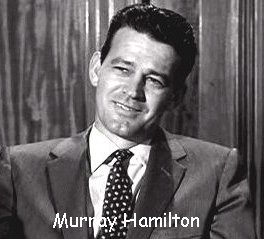 He was on TV starting in 1951 and played in just about every great police and detective series.  He also appears in many of the suspense genre shows, plus some westerns.  I think he worked best in dramas, teleplays and TV movies, but you will find him in a comedy or two.

While some of Hamilton's roles were bigger than others, he has always remained a Bit Actor in my book.  And I think an important one.  His acting in Jaws and The Graduate were right on the money, but don't forget to watch for him in The Hustler where he also had a great part.  The Hustler is always worth seeing again.
Posted by Bit Part Blogger