While not technically a Bit Actor, Al Kilgore has been enshrined in the minds of all Laurel and Hardy fans.

Al has one acting credit listed on IMDb and one stint in the art department of a documentary.  In 1966 he appeared in Captain Celluloid vs. the Film Pirates, a 49 min. B&W film made in NJ.

Here is the storyline from IMDb:
"Captain Celluloid battles the evil Master Duper and his criminal gang, the League of Film Pirates, who plan to hijack copies of classic films, copy them and sell them to desperate film collectors all over the world."

That doesn't sound like much of a movie, but I guess the creative juices of the cast and crew were running rampant, as Al often did.

He was a collaborator when The Sons of the Desert was founded, and he was called upon to design a crest for all to wear in the organization. 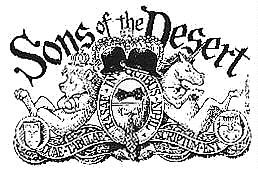 The crest bears the Latin motto: Duae Tabulae Rasae In Quibus Nihil Scriptum Est, which translates as "Two Minds Without a Single Thought."  This motto was suggested by Stan Laurel himself.

Al Kilgore also created one of the best Laurel and Hardy books in 1975, Laurel & Hardy. Compiled by Al Kilgore

.  He worked with author Jack McCabe, founder of the Sons, and also with Dick Bann, another famous film historian.  Al wrote or worked on other books as well.

I met Al in 1981, at a Sons of the Desert banquet in Philadelphia.  As part of our entertainment, Al came out dressed as a WWI doughboy and sang some songs of that era for us.  Then he dressed up as Groucho Marx and did an entire routine as Groucho.

After he was finished, I went out to the bar (a frequent occurrence at SoD banquets).  There was a wedding in one of the other rooms, and I looked in.  There was Al, still dressed as Groucho, and he was dancing with the bride!  Cigar in hand!

I guess you don't have to be a great Bit Actor to influence the movie industry.  Al Kilgore certainly brought a lot of enjoyment to Sons all over the world.

Please respect the photographs I have taken.  If you want to use them, please ask first.  It's probably OK, I just want to know and maybe receive credit under the pic!
Posted by Bit Part Blogger