I had written about the Bit Actors in this movie a few months ago and I was going to expand on that post for the Blogathon.  It turned out to be much more fun to write a new post instead.  This one may wind up being a bit longer than my usual offering.
Let’s start with the trivia.  Quick…what was Shirley MacLaine’s (b. 1934) film debut?  This is an Alfred Hitchcock Blogathon so that should give you a hint.  (Oh yeah, the answer may be found somewhere in my title.)  The Trouble with Harry from 1955 was MacLaine’s first film, made when she was just 21 years old, and it was the fifth film for young Jerry Mathers (b. 1948, and not as the Beav) who was only seven.
This was also the first pairing of Alfred Hitchcock (1899 – 1980) and composer Bernard Herrmann (1911 – 1975), who went on to a long relationship, making seven films together.  I think that Psycho (1960) would not be the same without Herrmann’s wonderful score.
The Trouble with Harry is Hitchcock’s favorite Hitchcock film and Herrmann’s score for it was his favorite as well, according to the all-knowing trivia page on IMDb.
This was Edmund Gwenn’s (1877 – 1959) last of four Hitchcock films.  And finally, Philip Truex (1911 – 2008) played Harry, who was dead through the entire film.  This was Truex’s second and final big screen film.  The other was This is the Army (1943) with Ronald Reagan.  And poor Harry gets exhumed four times in the movie. 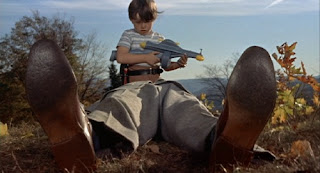 Alfred Hitchcock didn’t make many comedies, and this one was actually an experiment on his part, to see how a more British style of comedy, made with relatively unknown actors, would fare in .  Apparently it didn’t fare very well, and was a box office disappointment.  Hitch bought the rights back and held the film out of circulation for about 30 years.  It was re-released in 1984, thank goodness!
I would imagine that die-hard Hitchcock fans may not appreciate Harry.  It does not contain the gripping suspense of most of his other work.  In fact it is more comedy than mystery.  But it contains a lot of Hitchcock.  The way the shots are framed in the camera is unmistakable.  The excellent direction of many newcomers to film, which may have been instrumental to their future success, came only from Hitch.  And the Bernard Herrmann score adds to the feel of the movie.

In short, the story is about a dead man found by a small boy.  Several of the town residents are convinced they caused Harry's demise.  And then there is the problem of the what the law would say, and how to dispose of the body.  After Harry is identified and it is thought he would not be missed, a simple burial in the field seems the best solution.  But Hitchcock adds twists and turns to complicate things.
The cast in Harry is short, only 14 strong, including Hitchcock's trademark walk-on.  The major Bit Actors are:

I don’t want to give away the entire plot by going into the rest of the story.  Since this is an unusual film for Hitchcock, you may not have seen it, so I don’t want to ruin the ending for you.  Let me say that it is definitely worth seeking out.  The beautiful, scenic, outdoor shots of in glorious Technicolor are quite a dichotomy to the story of a dead body found on a beautiful fall day.  And Hitchcock uses it to weave a fun, almost believable story, with a cast that works well together.
I hope you enjoy the entire Classic Movie Blog Association Hitchcock Blogathon.  As of this writing there are twenty of us participating.  Its good today is a holiday!  Here is the entire list of Blogathon entries.  If any of the links don't work, just click on the link to the CMBA site, just above here.  Have fun!
1. The Birds – Classic Film & TV Café http://classic-film-tv.blogspot.com/
2. Dial M for Murder – True Classics: The ABCs of Film http://trueclassics.wordpress.com/
3. The Lady Vanishes – MacGuffin Movies http://macguffinmovies.wordpress.com/
4. Lifeboat – Classicfilmboy’s Movie Paradise http://www.classicfilmboy.com/
5. The Man Who Knew Too Much – Reel Revival http://reelrevival.blogspot.com/
6. Marnie – My Love of Old Hollywood http://myloveofoldhollywood.blogspot.com/
7. Mr. and Mrs. Smith – Carole & Co. http://community.livejournal.com/carole_and_co/
8. North By Northwest – Bette’s Classic Movie Blog http://bettesmovieblog.blogspot.com/
9. Notorious – Twenty Four Frames http://twentyfourframes.wordpress.com/
10. The Pleasure Garden – Thrilling Days of Yesteryear http://www.thrillingdaysofyesteryear.blogspot.com
11. Rear Window – Java’s Journey http://javabeanrush.blogspot.com/
12. Rebecca – ClassicBecky’s Film and Literary Review http://www.classicbeckybrainfood.blogspot.com/
13. Rope – Kevin’s Movie Corner http://kevinsmoviecorner.blogspot.com/
14. Shadow of a Doubt - Great Entertainers Media Archive http://greatentertainersarchives.blogspot.com/
15. The 39 Steps – Garbo Laughs http://garbolaughs.wordpress.com/
16. Three Classic Hitchcock Killers – The Lady Eve’s Reel Life http://eves-reel-life.blogspot.com/
17. Torn Curtain - Via Margutta 51 http://www.via-51.blogspot.com/
18. The Trouble with Harry – Bit Part Actors (That's me!)
19. Vertigo – Noir and Chick Flicks http://dawnschickflicks.blogspot.com/
20. The Wrong Man – The Movie Projector http://movieprojector.blogspot.com/
Posted by Bit Part Blogger