Let's think about Dean Martin (1917 - 1995) the Bit Actor and King of Cool.  Of course Everybody Loves Somebody, and Dino is one of my favorite singers, which probably gives away my age.  His music is heard in the soundtracks of over 160 films and TV shows.

He also appears as an actor/comedian in eight TV shows, including the very first broadcast of "Toast of the Town," which would later become "The Ed Sullivan Show."  But let's Sway over to his 55 films as an actor.

His most famous roles were certainly as half of the Martin and Lewis team with Jerry Lewis, which was the real start in movies for both of them.  They made 16 movies as a team, and also appeared together in Road to Bali (1952) with Bob Hope and Bing Crosby.

By 1956 the team was finished.  Dean wanted to have his own movie career, but he had to reinvent himself to a certain degree for it to work.  His first solo film, Ten Thousand Bedrooms (1957), was not a box office success.  It also starred Anna Maria Alberghetti (b. 1936). 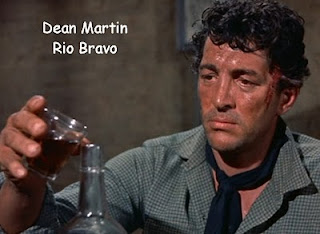 The next year he starred with Judy Holliday (1921 - 1965) in Bells Are Ringing, and also made Ocean's Eleven with the Rat Pack.  I was sad that Ocean's Eleven didn't have more music.  Only Sammy Davis Jr. has a number.  Dean made several more movies with his Vegas buddies in the next few years, including a total of six with Frank Sinatra.

I think Dean liked serious westerns.  He worked with John Wayne in two, Rio Bravo and The Sons of Katie Elder (1965).  He also made Rough Night in Jericho in 1967, Bandolero! and 5 Card Stud in 1968, among others and some TV westerns.

In his Matt Helm series, we see the over-the-top comedy that worked for a while, but I tend to get tired of it.  Here is part of the story line of The Ambushers (1967) from IMDb:

"A government space saucer is hijacked mid-flight by a powerful laser beam under the control of Jose Ortega, who then proceeds to rape the female pilot, Sheila Sommars. ICE sends agent Matt Helm to Acapulco with Sheila to recover the saucer, under the guise of Matt taking fashion photographs of beautiful models."

I think you see what I mean, but That's Amore.  He made four Matt Helm movies, until everybody else got tired of it.

Just after the last Helm movie, The Wrecking Crew (1969), Martin takes a dramatic role in Airport (1970) as the co-pilot with marital problems and a broken plane to land.  I thought he played the part well, using his humour in some scenes, but also allowing his softer side to show through.

Somehow he managed to end his film career on a low note by making The Cannonball Run (1981) and Cannonball Run II (1984).  Ain't That a Kick in the Head?  Well Dean, because of the rest of your career, and your wonderful voice, I forgive you.

Dean Martin was a star, but I also think he had Bit Actor parts in some of these movies.  As Dean would croon, Memories are Made of This.
Posted by Bit Part Blogger