Three on a Match

Back in the early days of talkies, you turned out a lot of films if you wanted a decent income.  This was before residuals and advertising, and also before an actor could negotiate for a portion of the profits of a film in lieu of a salary.  The big studios controlled everything.

Ann Dvorak made a total of 86 titles including a few TV shows in the early 1950s.  I must admit that I am unfamiliar with her work and most of the movies she made.  In fact, I have never heard of the TV shows she made, including "Gruen Guild Theater" and "The Bigelow Theatre."

Warren William is a bit better known, at least to me.  He was a big star and has 65 movies in his filmography.  In Gold Diggers of 1933 he played Dick Powell's brother who eventually falls in love with Joan Blondell.  I think everybody in Hollywood knew everybody else in those days.  Look for him as Julius Caesar in the Claudette Colbert version of Cleopatra (1934).  In 1941 he appears in The Wolf Man with Lon Chaney, Jr., Claude Rains, and Bela Lugosi. 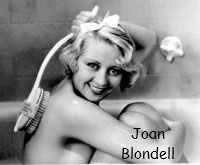 What can I say about Joan Blondell?  A former Ziegfeld Girl, Joan also worked in five of Busby Berkeley's best musicals of the era.  She appeared in the movies and on TV 156 times.  At 72 years old she appeared in Grease (1978).  Blondell is one of my favorites, perhaps because she was usually portrayed as an honest working girl, but she also had an angle!  And she's not bad looking!

The Bit Actors included Humphrey Bogart (1899 - 1957) in a small role.  This was his ninth feature and was two years before The Petrified Forest, one of his defining roles.  I like looking at the early careers of famous stars, just to see where they came from.

We also see Lyle Talbot (1902 - 1996) in one of his many roles.  This was also his ninth film, and his list goes to 309 titles from 1930 to 1987.  Trying to list his highlights would take more time than I have today.  He was famous in B-movies and worked for Ed Wood.  Toward the end of his career he did a lot of television work, including everything from "The Lone Ranger" to "Who's the Boss?" and "Newhart."

See the movie!  Three on a Match touches on some tough topics of the day, and deals with them in a frank manner.  It doesn't glamorize the prohibition era drinking and drug use, and it comes to a tragic end, but somehow you are gratified by it because you know everything will be OK.
Posted by Bit Part Blogger