Final Analysis (1992) is a murder mystery starring Richard Gere, Kim Bassinger and Uma Thurman.  It is made in the style of Alfred Hitchcock, and it is a good movie, but it doesn't quite make the mark.

Gere is a psychiatrist treating Thurman, and she asks him to talk with her sister, played by Bassinger.  To make a long story short, and hopefully not give away the plot, Bassinger's husband, a gangster, is murdered.  Bassinger is charged with the crime and Gere gets pulled into the action.

My blog is not about plots, stories or stars, so let's get to the important stuff.  Bassinger's husband is played by Eric Roberts (b. 1956) and he is superb.  I wouldn't mess with this gangster!  Roberts has close to 200 titles on IMDb, starting on TV in the 1970s.  He has worked with stars as different as Shelley Winters, Sylvester Stallone and Cheech Marin.  He has eight projects in the works for release this year, and he plays Vance Abrams on television's "The Young and the Restless."

The detective who has to sort out the story is played by Keith David (b. 1956) and he is also perfectly cast.  Stern and serious, he gets the job done...eventually, and with help from Gere.  David has 190 titles listed, so he is no stranger to acting.  His first movie credit came in John Carpenter's The Thing (1982), starring Kurt Russell.  He also appeared in Platoon in 1986, The Quick and the Dead (1995), Volcano (1997), There's Something About Mary (1998), and was a pastor on "ER" for two years.  David has nine productions in the works for this year.

The rest of the cast is almost invisible.  The only other characters that are important are played by Paul Guilfoyle (b. 1949) and Robert Harper (b. 1951).  Guilfoyle, the defense attorney, has 97 titles and Harper as a witness for the defense, has 60.  Both, once again, pull off their part very well, but without becoming etched in your memory.  Nonetheless, they are important bit parts to the story. 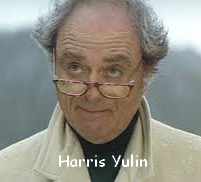 Lastly, Harris Yulin (b. 1937) plays the prosecuting attorney.  There is a name you probably don't know, but you will remember him when you see his face or hear his voice.  A veteran of 113 titles, including everything from playing Wyatt Earp in Doc (1971) to a guest spot on "Star Trek: Deep Space Nine."  He has also played Barabbas, George 'Machine Gun' Kelly, J. Edgar Hoover and Leonardo da Vinci.

I would say, if you have never seen a Hitchcock film, Final Analysis would be a very good film.  If you are familiar with Hitch, it is still a good movie to watch some evening.
Posted by Bit Part Blogger