The credits are amazing.  Directed by George Cukor and with a screen play written in part by Arthur Miller (Monroe's husband), there were cameos by Milton Berle, Bing Crosby and Gene Kelly.  I am not sure why I didn't like this movie more than I did.

It was noted in some reviews on IMDb that it was not particularly favored by Monroe or Montand.  A small part as the male singer was played by Frankie Vaughan (1928 - 1999) who only appeared in seven movies.  He was so put off by the experience that he gave up acting.

Vaughan wasn't very good, in my opinion.  He was trying too hard to be Frank Sinatra, but his singing was less than impressive.  He apparently went on to be a headliner in London and Vegas, and he was knighted by the queen a few years later. 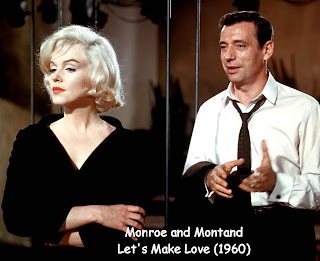 I didn't even see any chemistry between Monroe and Montand.  In the movie, Montand was supposed to be smitten with Monroe, and eventually Monroe came around.  What is interesting is that the two, though both were married at the time, did have an affair during the filming.  Maybe they were trying too hard to hide their feelings.

Let's Make Love is not really a bad movie.  It is a romantic comedy that is a little dated due to the style of 1960.  I think 1960 was a transition between the war years including the boom just after the war, and the free love era that was yet to come.  Movies made in that middle period are a mix of styles, so they didn't easily fit. 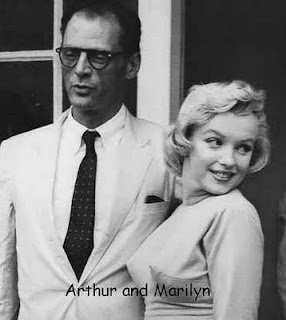 Marilyn Monroe is really the standout in this film, turning in a very good, believable performance.  For the fact that this was her second to last film, a year before The Misfits with Clark Gable, it is worthy of viewing.  By this time in her life she must have been troubled, but she still could act and sing.
Posted by Bit Part Blogger