MacDonald was a favorite of John Ford and also Frank Capra.  Good company to be in.  He made about 25 films with Ford as director or writer, including some 18 silents when he was still being billed as Jack Ford.  He worked in three Capra films.

In his silent films, he worked with some of the greats such as Mary Pickford, Tom Mix and Harold Lloyd.  MacDonald successfully made the transition to talkies through the evolutionary period of 1927 to 1928.  The early sound films had music and sound effects played on a record during the movie, with hit or miss synchronization.

I hesitate to say any of his films were better than others.  Back in the 1930s and 1940s, movies were turned out at a phenomenal rate because it was inexpensive entertainment and the demand was so high.  Character actors like J. Farrell MacDonald were in needed, hence the reason he made so many films.  They can't be all great, and the certainly aren't all bad.

In 1940 he is in Dark Command with another great cast.  John Wayne, Claire Trevor, Roy Rogers, Gabby Hayes, Walter Pidgeon and Marjorie Main.  Over the years he made seven films with William 'Hopalong Cassidy' Boyd, and four with The Duke. 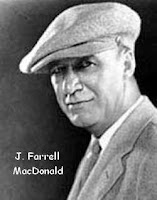 Meet John Doe (1941) and It's a Wonderful Life (1946) were two of his Capra films.  He played the man whose grandfather planted the tree in Wonderful Life.  It was a role that you didn't think about twice, but he played it well, and I bet you remember it.

The last movie he made where he received screen credit was Superman and the Mole People in 1951, starring George Reeves (1914 - 1959).  I suppose there were a few films where MacDonald had top billing, but he mostly used his talent to make the stars look good.  That's what a Bit Actor does best.
Posted by Bit Part Blogger