When it first came out, I would shorten An Officer and a Gentleman (1982) to An O and a G.  Sorry.  I guess I have to explain myself sometimes.

More in the way of explanation, my wife and I currently working our way through the "Ugly Betty" TV series, as a diversion to life.  It works...sometimes.  I noticed Tony Plana (b. 1952) as Betty's father, and wondered what else he was in.  That started me thinking about a blog topic.

Tony Plana has 151 titles on IMDb, a good mix of movies and TV.  In An O and a G he was the Hispanic officer candidate, Emiliano Della Serra.  It was his sixth movie, and he had also appeared in quite a few TV shows by then.

Plana, born in Havana, Cuba, tends to play Hispanic parts, and he appears in quite a few of the better detective shows on television in the 1980s.  "Cagney and Lacey," "Remington Steele," "Hill Street Blues," "Miami Vice," and "L.A. Law" to name a few.

His choice of roles in movies seems to be less fortunate, and I think that keeps his name from becoming a household word.  He was in the Raul Julia (1940 - 1994) biopic, Romero in 1989, and he had small parts in The Rookie and Havana in 1990.  His career continues with a good amount of work, but few starring roles outside of TV. 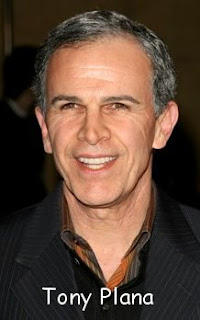 Lisa Blount (1957 - 2010) had a larger part in An O and a G than Plana, and that role is what she is remembered for.  She had only 47 titles in her career.  She was known as a 'scream queen' for her parts in some horror flix in the 1980s.  I have often wondered why talented actors take those roles.  That kind of movie would have been a B-picture 40 years before that decade.

Blount's last movie was Randy and the Mob (2007) starring Ray McKinnon (b. 1957) who also wrote and directed, and his production company partner Walter Goggins (b. 1971).  Sorry, I am unfamiliar with that movie and the stars.  Choices like that can hold you back.

One more, just for comparison.  David Caruso (b. 1956) also had a very small part as an officer candidate, who drops out before graduation.  Caruso only has 46 titles, and An O and a G was his fourth film, but his name is much better known that Blount or Plana.

Caruso's first big TV break was a regular role on "Hill Street Blues" and I think he found a home on television. In addition to his movie work, he was a star on "NYPD Blue," and played the same detective role on "CSI: Crime Scene Investigation," "CSI: New York," and "CSI: Miami."  He is still the star in CSI, of one of the best detective shows on TV.

Is the talent of these three so different?  Sadly, Lisa Blount had health problems and passed away at age 53.  Her career might have improved.  Tony Plana is versatile, talented, and working regularly...but he is not a big star.  He has made four times the number of production as the others.  Is David Caruso so different?
Posted by Bit Part Blogger