Wife vs. Secretary or Harlow vs. Loy

I must admit, up until this month, I had only seen her in the two Laurel and Hardy films she made in 1929, Double Whoopee and Bacon Grabbers.  She was also in City Lights (1931) the Chaplin classic, but was only an extra so I didn't notice her.

We started out by watching Bombshell (1933), an early starring feature with a very platinum blonde Harlow.  I believe it was typical of some early talkies to have too much dialog in a movie populated by a cast of former stage actors who project all the way to the back row of the theater.  Someone needed to tell them that the microphone was closer.  As a result, the movie is difficult to watch.  The talking is too fast, and combined with the colloquial way of speaking in the thirties, I couldn't easily follow the story.  To really understand this movie would take three viewings.

Then we watched Reckless (1935).  I figured two more years of sound experience, plus William Powell (1892 - 1984) would make this a better experience.  Harlow and Powell were lovers and I hoped there would be on screen chemistry.  It was another disappointment.  The script was beneath them both, and it became boring, but Harlow was beautiful and quite accomplished for only 24 years old.

We struck cinematic gold with Wife vs. Secretary.  The pairing of good friends Myrna Loy (1905 - 1993) and Jean Harlow (now with toned down, more natural blonde color), was perfect.  Clark Gable (1901 - 1960) got top billing because he was the King of the Movies, but his part could have been played by any leading man of the time.  All eyes were on Harlow and Loy.

In a Bit Part, we have James Stewart (1908 - 1997) as Harlow's boyfriend.  This was only Stewart's fifth film, but you could see his bright future in every scene he had. 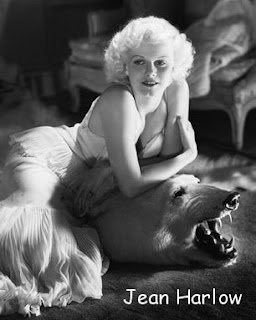 I can't say enough about this film.  The story took you through all the emotions of the head of a publishing empire and his desire to succeed, his secretary who knows her help is needed by him, and his wife who only wants to give her love as he gives his to her.  Plus, the frustration of Harlow's boyfriend who thinks he may be losing her.  The fact is, everybody loves everybody else, but is Harlow just too much of a temptation for Gable?

There is no sex, because this was after the Hays Code.  Loy and Gable even have separate bedrooms.  But listen closely and you can hear the innuendos.  These were all sexy stars and they could deliver the message in body language plus a few words.

I was going to commit Wife vs. Secretary to VHS tape, but I think I'll order the DVD set instead.  (I really need to get that home theater PC I've been thinking about!)  Harlow was a star for a very short time.  I wonder what her future would have brought.  Would it have been filled with success in a long life like Bette Davis, or end in tragedy like Marilyn Monroe?  Kidney disease took Jean Harlow at just age 26, so we'll never know.
Posted by Bit Part Blogger