Showing a very short acting list on IMDb, Garrison Keillor (b. 1942) must be considered a Bit Actor, but he is also one of my favorite people to listen to...and I bet I'm not alone.

GK, as he is known, only has one big-screen feature release, A Prairie Home Companion (2006), which was based on his popular radio program by the same name.  The film brings to life some of the story lines that are used in the radio program.  Specifically I remember the character, Guy Noir, played by Kevin Kline (b. 1947).  Noir is a private detective, and his stories are featured every week on "A Prairie Home Companion."  His part is written into the movie as a character who shows up during a live radio broadcast, which stars GK as the host.

Others in this movie are all A-List stars.  We see Lily Tomlin, Tommy Lee Jones, Meryl Streep, Woody Harrelson, and even Lindsay Lohan, plus a few great cameos by Robin Williams and others.

Here is the problem with this movie.  You absolutely have to be familiar with the radio program to appreciate it.  If you haven't heard the program at least a few times, you won't have any idea what's going on...or why it is so funny  By writing a script this way, the producers had severely limited their audience, and their chance of having a hit.

I have included a link to the Amazon page for the radio program.  It is better than the movie, so start there.  After you understand GK and his crew, go watch the movie.  Otherwise it is a waste of great talent. 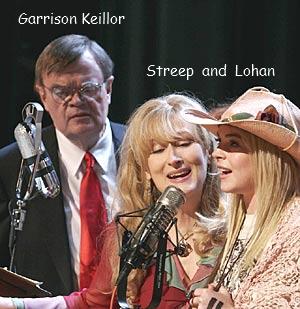 Missing from the movie cast is the wonderful sound effects technician, Fred Newman (b. 1952).  Fred is a mainstay on the radio program, and has reached rock star status among the (mostly) yuppie radio program audience.  Newman has 20 of his own titles on IMDb.

The rest of GK's titles are basically narrations for TV.  His biggest part was probably the Ken Burns series "The Civil War" where GK did the voice over of Walt Whitman.

With his many other "A Prairie Home Companion" fans, I love Garry Keillor.  I look forward to the news from Lake Wobegone, and even to the commercials, though they get a bit repetitive.  And every week brings interesting musical talent as well.

I enjoyed the movie!

(This blog was not brought to you by Powdermilk Biscuits.)
Posted by Bit Part Blogger