Bruce was actually born in Mexico, while his father was working there.  Royal blood flows (flowed) in his veins, and he was probably not acting very much in many of his roles, just being himself.

Look for him in the 1934 classic, Treasure Island, starring Wallace Beery and Jackie Cooper.  He then plays royalty (The Prince of Wales, no less) in The Scarlet Pimpernel (1934) starring Leslie Howard.

Bruce works with Fred MacMurray and Henry Fonda in The Trail of the Lonesome Pine (1936), and the same year with Errol Flynn in The Charge of the Light Brigade.

In 1939, his two most famous films were released by Twentieth Century Fox, The Hound of the Baskervilles and The Adventures of Sherlock Holmes.  He set the standard for Dr. Watson, just as Rathbone did for Holmes.  Sadly, the other twelve Holmes/Watson films, made for Universal in the 1940s, didn't maintain the quality.  They are still worth watching, though, and if you haven't seen them all, the mysteries are a lot of fun to see for the very first time.

Bruce and Rathbone also made Crazy House (1943) and Frenchman's Creek (1944) together.  I haven't seen either. 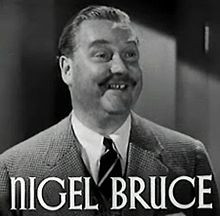 Bruce was in four films that included some Alfred Hitchcock work, but only in two that Hitch directed.  Rebecca (1940) and Suspicion (1941).  The other two were Lord Chamber's Ladies (1932) produced but not directed by Hitch, and Forever and a Day (1943) which had Hitch on the writing staff.

In 1943 and 1945 Nigel played a part in Lassie Come Home and Son of Lassie, respectively.  And in 1952 he appears as the Impresario in Charlie Chaplin's final big film, Limelight.

That is quite a career for a chap who basically played the same type-cast Brit.  He started in silent films and ended making a film with the biggest silent star who ever lived.

Nigel Bruce has 79 titles listed on IMDb, with only one appearance on television.  I can't name all of his work here, but let me know which were your favorites.  In my book, he will always be Dr. Watson.  I bet I'm not alone.
Posted by Bit Part Blogger