I started thinking about early Walt Disney (1901 - 1966) live action films and took a look at IMDb.  Well, Disney produced over 650 films, mostly shorts and most of the early films were animated.  With no easy way to figure out which were live action, I decided to continue looking at other resources.

On Wikipedia I found that Disney's first successful cartoon series' were the Alice Comedies.  Starting with the 1923 silent short, Alice's Wonderland.  These films included live action and animation.  Alice was originally played by Virginia Davis (1918 - 2009).  Walt himself, and Virginia's mother Margaret Davis also appeared in the film.  Also included in the film is Ub Iwerks (1901 - 1971), the legendary animator of the Disney Studios, and co-creator of Mickey Mouse (b. 1927).

There were about 57 entries in the Alice series. and they were made during Disney's move from Kansas City to California.  Virginia moved with the studio, to help Margaret's ambitious hopes for her daughter. 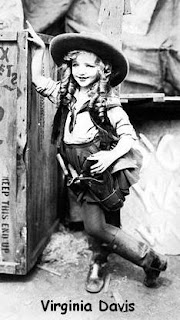 Wikipedia credits her with several films that don't appear in IMDb, and I have no way of checking those listed.  If you see Virginia Davis in Flying Down to Rio (1933), please let me know.

After leaving Hollywood, Virginia eventually started a career as a realtor in the mid-west, and ended up selling homes back in California.  She was later sought out by Disney fans and regained more popularity than she had when she was making films.  That must always be a shock to actors who thought they left their old career in the dust.

She certainly qualifies as a Bit Actress, and I would say a successful one, even with a short career spanning just 18 years and 28 films.  She helped make Walt Disney a household name.
Posted by Bit Part Blogger