The recent passing of director Tony Scott (1944 - 2012) brought to mind several of his great films. Where would Tom Cruise (b. 1962) be without Top Gun (1986) and Days of Thunder (1990)? I think my favorite Scott directed film is Crimson Tide (1995). It is a tense submarine drama involving two clashing warriors, Gene Hackman (b. 1930) as the old school sub captain, and Denzel Washington (b. 1954), the educated first officer who uses intellect and reason rather than blindly following protocol.

Enough about the stars. Let's get to the important Bit Actors who made this film great. People like George Dzundza (b. 1945) who played Chief of the Boat.

Dzundza started working on the small screen in 1974. His first movie was an Italian sex comedy called Fischia il sesso (1974), which translates to 'Whistle sex.' Fittingly, his next film was The Happy Hooker (1975) starring Lynn Redgrave (1943 - 2010). George can be found near the bottom of that cast list.

After a few hit or miss TV appearances on some hit or miss TV shows, his next film was The Deer Hunter (1978) with his name much higher in the cast. It was a great opportunity to work with Robert De Niro (b. 1943) and Meryl Streep (b. 1949).

Dzundza gets his own TV series in 1981 called "Open All Night." It only lasted one season and I never saw it. In 1987 he works with Gene Hackman for the first time in No Way Out, also starring Kevin Costner (b. 1955). Of course, we all remember George as Gus in Basic Instinct (1992) and that scene with Sharon Stone (b. 1958). Dzundza appears in more films and has some regular spots on television. Let's hope we see more of him.

Here are a few interesting Bit Actors from Crimson Tide. Lillo Brancato (b. 1976) played the radio man, in his third film after A Bronx Tale (1993) and Renaissance Man (1984). It sounds like a good start to an acting career, but after a few dozen acting jobs, including a stint on "The Sopranos," Lillo gets involved in a burglary. He is currently serving ten years in a New York prison. 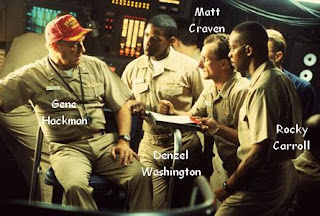 Remember Ricky Schroder (b. 1970)? His big part was in "Silver Spoons" in the 1980s. He has had a quite a few acting jobs since then, including his part as a lieutenant in Crimson. Keep on going, Ricky.

Steve Zahn (b. 1967) went on the play a teenage guitar player in That Thing You Do (1996) and a book seller who worked for Meg Ryan (b. 1961) in You've Got Mail (1998). Other parts are played well by Matt Craven, Jaime Gomez, Rocky Carroll, Michael Milhoan, Scott Burkholder and several more. You can find them everywhere, but they tend to blend in to the parts, as good Bit Actors always do.

It is interesting that most of the cast members are not famous, but they do have long filmographies that show a wide variety of parts in multiple media. They do comedies, dramas, voice over work, and TV shows. Of course, since Crimson Tide takes place almost exclusively on a submarine, almost every male part in the film is an officer or enlisted man in the Navy.

Lastly, at the board of inquiry that ended the film, we see famous Bit Actor Jason Robards (1922 - 2000) who actually starred in countless movies, and also on the board was Skip Beard who was the technical adviser for the film, since he was the real captain of the USS Alabama.