First, my apologies to any regular readers for me absence. I was wrapped up in a home improvement project that was completed successfully. Now I will try to contribute more frequently.

This week, Turner Classic Films (the best channel on cable) showed Intolerance: Love's Struggle Through the Ages (1916), one of the most famous silent films ever made. If you have never seen it, please go out and buy The Birth of a Nation (1915), watch it first, and then get Intolerance. Historically they go together in that order.

Walter made about 19 films under D. W. Griffith (1875 - 1948), including Birth and Intolerance. In The Birth of a Nation he played a slave in black face. He made ten films with Mae Marsh and eight with Lillian Gish. Also in the silent era, Walter worked with Douglas Fairbanks (1883 - 1939) and Mary Pickford (1892 - 1979) in two pictures with each. They, of course, went on to marry and found United Artists.

His silent films came to an end in 1928 (along with most other silent films) when his first talkie, Gang War, was released. There isn't much info about that one so it is probably lost. Long quickly adapts to sound films and his career continued. 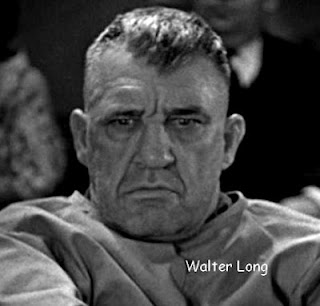 He appears in Moby Dick (1930) starring John Barrymore, and in 1931 he plays Miles Archer in the Ricardo Cortez (1900 - 1977) version of The Maltese Falcon. In 1932 he also has a small part in I Am a Fugitive From a Chain Gang, starring Paul Muni. I have not seen that film, but after reading some reviews, it sounds like one to look for.

Walter finally got to work on television on "The Ed Winn Show" and "Fireside Theatre" in those early days of TV. I have mentioned quite a few movies above. Spend some time watching them and try to look for Long's gruff face.

Although Walter Long was never a big star, his body of work was extensive, and his appearance as a tough guy helped many films, dramatic and comedic, to tell their stories. This is what a great Bit Actors does, and Walter was one of the best.
Posted by Bit Part Blogger