I just had the pleasure of seeing The Treasure of the Sierra Madre (1948) again. It is a movie that exists on several levels. Not only is it a fine action picture, but it can be seen as a real study of human nature. I'll leave the analysis to the other movie blogs, though. I am here to review Bit Actors.

In a fairly small part of this very big movie, we have Bruce Bennett (1909 - 2007) playing Cody, the unwanted and ill-fated companion of three prospectors.

Bruce was an athlete his entire life. He won the Olympic silver medal for the shot put in 1928. He could have gone on to win many more medals but he injured himself making his first movie, Touchdown (1931). His place in the Olympics was taken over by Johnny Weissmuller (1904 - 1984), who went on to become another Tarzan. At the time, Bruce was still known by his real name, Herman Brix.

Herman decided on a movie career. His early screen time is filled with roles, logically, as an athlete. He was a football player, a wrestler, a student, a man in the bar, it all fit at the time. He worked with Jack Oakie, Bing Crosby, W. C. Fields, Ted Healy and his Stooges, and others in those early days.

His first big film had him in a small part. He did appear in Treasure Island in 1934 as a man in the tavern. In 1935 Herman had his biggest break. A serial called The New Adventures of Tarzan was to be filmed in Guatemala. And Herman would have the title role.

Unfortunately, the serial was a financial disaster. Brix and the rest of the cast and crew never made much more than having their expenses paid for all their effort. BTW, Juggs played Nkima the chimp, which was his second film appearance after working with Laurel and Hardy in Dirty Work (1933).

Herman appeared in quite a few films between Tarzan and the late 1930s, but few were notable. He was a Bit Actor in Bit Films and serials. He was typecast in his Tarzan persona and had difficulty convincing studios to let him do much else. He decided to change his name to Bruce Bennett.

As far as I can tell, the first film with Bruce Bennett in the credits is My Son is Guilty (1939) starring Bruce Cabot of King Kong (1933) fame. But the name change didn't seem to make a lot of difference in his career. The films he works on are not all great movies. He even made four Three Stooges shorts as Bennett.

But it isn't all bleak and there are some good films where he shows that he does have acting talent. He is even a co-star in a few films of the era, though not blockbusters. The 1940s were the era of film noir and great war stories. Bruce was in 21 films during the WWII years, in spite of serving in the military himself.

It is also in this time frame that Bruce worked with Humphrey Bogart on four films. The first was Invisible Stripes (1939) with George Raft in the lead and Bennett uncredited. Next was Sahara (1943) and Bennett is near the top of the cast as Waco Hoyt, the tank crewman who risks his neck to go off in search of help. 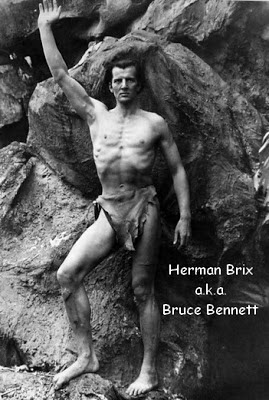 Without question, my favorite of the four Bennett/Bogart films is Dark Passage (1947). This is my favorite Bogart film, and perhaps my favorite film. It has everything...Bogart with Bacall, a real film noir style, and a perfect cast with Agnes Moorehead as the bad guy you can easily hate.

Bit Actors Tom D'Andrea and Leonard Breman filled in the needed color for a great movie, and Houseley Stevenson put 'noir' in the film. (Read about D'Andrea and Breman by clicking on their names or the Dark Passage link in my label list to the right.) Bruce Bennett plays Bob, Bacall's former boyfriend who nobly steps aside for Bogart. I am still trying to find that bar in Peru! GREAT FILM!

Of course, his last film with Bogart is The Treasure of the Sierra Madre (1948). What more can I say?

One other standout film for Bennett in the forties was Mildred Pierce (1945) starring Joan Crawford. After Treasure, his acting career would go downhill (again). In the next three decades he would appear in many films and television shows, but only a few are worth mentioning.

But, as an actor you should know something is wrong with your career when you start taking pictures called The Cosmic Man (1959), The Alligator People (1959), and The Fiend of Dope Island (1961).

Bruce Bennett's last American film was The Clones (1973). He did appear in many TV shows and that kept his career moving forward, and the income would have been decent. It is said that he had an interest in parachuting and his last jump was at age 92. He stayed fit, he was good in business, and I put him in the ranks of some of the best Bit Actors.
Posted by Bit Part Blogger