I certainly hope everyone got the official Red Ryder carbine-action, 200 shot, range model air rifle with a compass in the stock and the thing which tells time for Christmas. I asked for one, but I got the movie instead. I really can't use a BB gun in my condo, so the movie and the sequel (along with a bottle of liquid entertainment from Kentucky) was just fine for me.

Of course I am talking about A Christmas Story (1983) which has become a holiday classic in many households. But, who was Red Ryder? Come with me now to those thrilling days of yesteryear...sorry, that was "The Lone Ranger."

Red Ryder started life as a comic strip in 1938, which became syndicated and incredibly popular. A lot of marketing was added to the name, hence the BB gun that is still available from Daisy.

The next important reincarnation was the 1940 movie serial, The Adventures of Red Ryder, starring Don 'Red' Barry (1912 - 1980). Barry was quite an accomplished actor in his long career, but much of his work came as a guest star on television. He was in everything from "Dragnet" in 1955 to "Knots Landing" in 1980.

In his early days, he was a regular in the Dr. Kildare series of films, and he certainly made his mark in a load of B westerns. In fact, you would be best to look for any of his early work, rather than the movies he made later in life. Blazing Stewardesses (1975), Dr. Dracula (1978), etc. Some were better than those, but his parts were usually small and many times uncredited.

Also in the original Ryder series was Tommy Cook (b. 1930) as Little Beaver, and Noah Beery (1882 - 1946) as Ace Hanlon. In 1941 Cook worked in another serial called Jungle Girl. After working on the Red Ryder radio serial in 1942, he made quite a few movies in the 1940s and 1950s and then moved into TV. As an adult, he had difficulty getting acting roles and his popularity and acting career ended. Noah Beery's part as one of the villains in this serial does not continue into later films.

In 1944 we see Bill Elliott (1904 - 1965) take over for the first of a series of Red Ryder movies for Republic. This one is called Tucson Raiders, and Little Beaver is now played by Bobby Blake (b. 1933), a former Our Gang kid who managed a good career before turning weird in his personal life.

Elliott made 16 Red Ryder films, plus over 240 other films, mostly before Red Ryder. He was known as Wild Bill Elliott for much of his career after starring in The Great Adventures of Wild Bill Hickok in 1938. He made 13 films as that character. 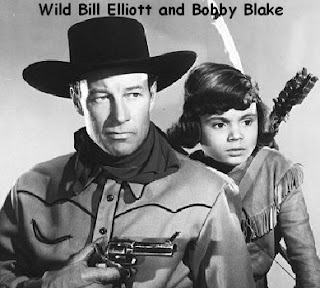 For the 16 Elliott/Ryder  films, we also see Alice Fleming (1882 - 1952) as Red's aunt in the entire series. Peggy Stewart (b. 1923) appears in many of the films. She had been married to Red Barry for a few years, and she is still working. Look for her in the Adam Sandler (b. 1966) film That's My Boy (2012). It amazes me that she could be in so many of the Ryder series and play different parts each time. Didn't anyone notice?

The final Ryder film with Bill Elliott was Conquest of Cheyenne in 1946.

Next up in the Red Ryder role is Allan 'Rocky' Lane (1909 - 1973). The Rocky Lane character would reappear 36 times for Allan in his best remembered B westerns from 1947 to 1953. Bobby Blake continued as Little Beaver, and Peggy Stewart appears several times in the Lane/Ryder movies.

Santa Fe Uprising (1946) is the first of seven Red Ryder films for Lane, and Red's aunt this time is played by Martha Wentworth (1889 - 1974). Lane ended his stint in Marshal of Cripple Creek (1947), and this was also the last Ryder flick for Republic Pictures.

Jim Bannon (1911 - 1984) finishes the Red Ryder film franchise at Equity Pictures with four movies in 1949. Ride, Ryder, Ride through Cowboy and the Prizefighter. Little Beaver is played by Don 'Little Brown Jug' Kay Reynolds (b. 1937 or '38...) the son of a horse trainer and a great trick rider in his time. Jug only made a few films, all westerns.

Ryder's aunt is now played by Marin Sais (1890 - 1971) and Peggy Stewart is still along for the Ryde in various roles. You may notice the character of Ace Hanlon returning in Roll, Thunder, Roll (1949). This time it is played by Glenn Strange (1899 - 1973) who went on to tend bar at The Longbranch for Miss Kitty in "Gunsmoke."

"Red Ryder" would continue on television in a few episodes starring Allan Lane and Jim Bannon, but by the early 1950s it had run it's course. Information on these episodes is sparse and I am not an expert here. Please write about your memories of Red Ryder on TV.

All of the actors mentioned above, with the possible exception of Jug Reynolds, were Bit Actors of the highest acclaim. None of them have less than 90 titles in their credits and many have more than 200. The fact that Red Ryder was brought back into the public consciousness by Jean Shepherd's (1921 - 1999) story and later movie, is just one more reason for classic film lovers to reach out to the younger generation and show them the background that will enhance their understanding of the new story.

Talk it up with your kids. Maybe they won't shoot their eye out.
Posted by Bit Part Blogger