The Other Gildersleeve - Willard Waterman

We covered the career of Harold Peary last time. (See below.) He originated the character of Throckmorton P. Gildersleeve for the radio show Fibber McGee and Molly around 1939. In 1941 it was spun off to a new radio program, The Great Gildersleeve. The role was really his, and he even created the catchphrase, "You're a hard man, McGee!"

In 1950, due to contract changes, Willard Waterman (1914 - 1995) took over the radio part with a very similar vocal talent. Peary moved to CBS, while NBC retained ownership of Gildersleeve. Waterman was much more visible than Peary, with more TV and movie roles, so many recognize him as The Great Gildersleeve.

IMDb credits Peary with 60 roles and Waterman with 80, but that doesn't take into account the number of television episodes that would put Waterman even more in the lead. In spite of that, Waterman only appeared on screen as Gildy in the 1955 television series, "The Great Gildersleeve."

Waterman started his film career making one-reel comedy shorts. He was in several of the 60 or so Joe McDoakes series with George O'Hanlon (1912 - 1989). Willard has small, mostly uncredited parts in several films in his early days. For example, he is in No Man of Her Own starring Barbara Stanwyck, Ma and Pa Kettle Go to Town, Riding High with Bing Crosby, Louisa with Ronald Reagan, and half a dozen other films, all in 1950.

But 1955 was his year on television, when he starred in "The Great Gildersleeve." It only lasted one year, but he was the star. I have read that Waterman didn't look the part of Gildy. He was very tall and Gildersleeve was perceived as a small man. At any rate, the part was getting old, since it ran it's course on radio. 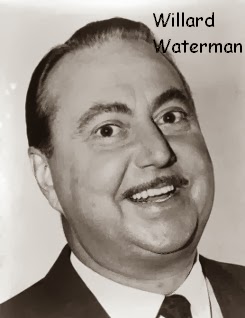 After that, he was in demand as a guest star on many TV shows, with multiple appearances on "The Eve Arden Show," "The Real McCoys," and "Bat Masterson."

Waterman continued working in only a few more movies, including The Apartment (1960), Walk on the Wild Side (1962), Get Yourself a College Girl (1964) and Hail (1973). Stick with The Apartment, the rest don't look very good, and watch for Waterman as Mr. Vanderhoff.

Television remained his forte. He was in everything from "Bonanza" to "F Troop." Notably he had multiple appearances on "Pete and Gladys," "Maverick," "Wagon Train," "Mister Ed," "The Lucy Show," and a regular role on "Dennis the Menace" as Mr. Quigley.

He also appeared on "The Red Skelton Hour," "The Dick Van Dyke Show," and "The Smothers Brothers Show," which presented some of the best comedy on television.

All in all, Willard Waterman had a wonderful acting career. He passed away in 1995 at age 80.
Posted by Bit Part Blogger