After I saw Willard Waterman (1914 - 1995) on an episode of "Bat Masterson" (gotta love that Encore Western Channel) with his instantly recognizable voice, I thought I should take a closer look.

The early B comedies must have been very entertaining. Well worth looking for if you are building a collection of true classics.
1941 - Country Fair with Eddie Foy, Jr.
Look Who's Laughing with Edgar Bergen and Charlie McCarthy.
1942 - Here We Go Again also with Bergen and McCarthy.
Seven Days Leave with Victor Mature and Lucille Ball.
The Great Gildersleeve with Peary finally taking top billing, plus the incomparable Jane Darwell.
1943 - Gildersleeve's Bad Day again with Darwell.
Gildersleeve on Broadway with Billie Burke.
1944 - Gildersleeve's Ghost with a lesser known cast. 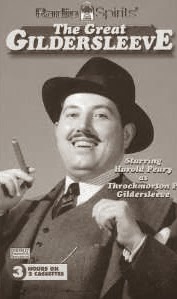 From there, Peary makes the obvious jump to television. His voice is perfect for a comedic next-door neighbor, or an authority figure like a judge or mayor. But he also played many dramatic parts.

His first regular TV gig in the mid 1950s is on "Willy" starring June Havoc (1912 - 2010). He also can be found in 1957 on "Blondie" with Arthur Lake and Pamela Britton. In 1959, in a twist of fate, he appeared in three episodes of "Fibber McGee and Molly" but there was no Gildersleeve character!

The rest of Peary's television work was basically as a guest star, with several episodes on some series' including "Petticoat Junction."

He continued making a few films throughout his career, but nothing notable after television caught his eye. Films like Wetbacks (1956) with Lloyd Bridges, Outlaw Queen (1957) starring Andrea King who went on to make a film called Blackenstein (1975 - Look that one up!), a Disney film called A Tiger Walks (1964) starring Brian Keith and Vera Miles, and his last film, Clambake (1967) starring Elvis Presley. You can even find him in an AT&T telephone training film called Invisible Diplomats (1965) with Audrey Meadows.

Let's take a look at the career of Willard Waterman who took over the Gildersleeve role next time. Stay tuned!