I recently was accepted into the Classic Movie Blog Association.  There is now a link button on the right of my blog to the CMBA site, where you will find quite a variety of movie blogs on all sorts of subjects.  The CMBA has been around for nearly a year, so I am happy to be included so early in the game.  I found that when you are a member and you update your blog, it will appear at the top of the member list on their site.  At least until the next member updates.  That's probably how many of the foreign readers found me.

I put a counter on my blog which can be found on the right hand side and down a ways. It is interesting to see that people from ten different countries have found this blog and may be reading some of what I have written. I hope you all enjoy it, but please note that I do not even try to be all encompassing, or even totally accurate. I remain at the mercy of the research available to me on the Internet, in my limited collection of books, and my limited knowledge of films.

Let's cover just one bit actor today.  How about Ken Curtis?  Yes, Festus Haggen from TV's "Gunsmoke" was truly a bit actor.  He lived from 1916 to 1991.  When he started making movies, he made mostly B westerns.

Curtis was a member of The Sons of the Pioneers...the wonderful, close harmony, cowboy singing group founded by Roy Rogers in 1933, when Rogers was still Leonard Slye. 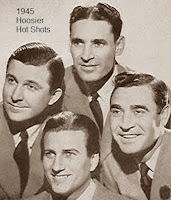 Curtis' first film was a musical western, in the line of Roy Rogers and Gene Autry.  The year was 1945 and the title, Rhythm Round-Up.  The Hoosier Hot Shots are listed in the cast.  On the Hot Shots' web site they are billed as "the creators of Midwestern Rural Jazz."  Quite an accomplishment.

Curtis made three early westerns (1945 and 1946) with Andy Clyde, and worked with Grady Sutton as well.  In several of his westerns he used the first name Curt, which was his real first name (Curtis Wain Gates).  I wonder how much creative control was left up to the actors back then.


His first big movie would have been Rio Grande (1950) with John Wayne and directed by John Ford who was his father-in-law, but he only had a small part.  He worked with John Wayne in seven more films, including The Searchers (1956).

He appeared as a member of The Sons of the Pioneers in 1951's Fighting Coast Guard with Brian Donlevy.  In other non-westerns he was a yeoman 3rd class in Mister Roberts (1955), a priest in Spencer Tracy's The Last Hurrah in 1958, and he played a variety of other small roles.

He started working seriously in TV around 1960 and it must have agreed with him.  He appeared multiple times on "Have Gun - Will Travel" and "Ripcord."  In the 1980's he was in a series unfamiliar to me called "The Yellow Rose" with Cybill Shepard.  And of course, his role as Festus on "Gunsmoke" is his biggest claim to fame.
Posted by Bit Part Blogger