After writing about Our Gang yesterday, and also including a dog tale in the post, I did some research on the dog named Pete in the Our Gang comedies.  Pete is one of the most recognizable animals to ever appear in film, mostly because of the ring around his eye.  That aspect of him opens up some urban legends.

According to IMDb, before making the Our Gang comedies, the same dog, named Pete the Dog, was used in the silent film series Buster Brown, and he played Tige from 1925 to 1929.  IMDb lists his birth name as Pal and death date as 1930.  Here is where IMDb shows itself as a less than accurate source for really obscure information.  There is another entry for Pal the Dog, that does not list Buster Brown or Our Gang and did not work at Hal Roach Studios.  Perhaps there were two Pals, I do not know, but follow me on this.

Pal the Dog has a listing of 15 films from 1920 to 1927.  His death date is shown as November 18, 1929.  Pete the Dog (our hero) made 61 films from 1925 to 1931.  His last film, The Slippery Pearls, was a promotional film to raise funds for a tuberculosis sanatorium, and must have been released after his death, probably using existing footage.

Pete the Dog appeared in his first three films in 1925 at Hal Roach Studios.  Two were with Babe Hardy (Somewhere in Wrong and Yes, Yes, Nanette, before Ollie began using Oliver as his screen name), and one (Dr. Pyckle and Mr. Pryde) with Stan Laurel.  Then he moved into the Buster Brown series, and eventually worked with Our Gang from 1929 to 1930 where he made seven shorts.

Confusion alert!  There is also an entry for Pete the Pup on IMDb.  Pete the Pup made only three Our Gang shorts; The Kid from Borneo (1933), Teacher's Beau (1935), and Roamin' Holiday (1937).  All three dogs (Pal the Dog, Pete the Dog and Pete the Pup) were American Staffordshire terriers, or pit bulls.

I looked at the Allmovie web site and they list Pete the Pup appearing in 76 films, 75 of them are Our Gang films, from 1925 to 1928.  Perhaps they are listing the character name rather than the actor.  They do not list him as appearing in the Buster Brown series, so I searched for Pal the Dog.  That listing shows Pal the Dog as appearing in only 13 films from 1921 to 1943!  This cannot be accurate, because his last film listed was Lassie Come Home.  Pal was the name of the collie who played the first Lassie in movies, but that Pal was born on June 4, 1940. 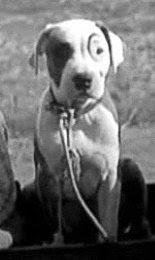 Wikipedia has some, possibly accurate, information that at least makes sense.  Pal played Tige in Buster Brown and was the first Pete in the Our Gang films.  He was owned and trained by Lt. Harry Lucenay.  Pal sired a puppy who was born on September 6, 1929, and was named Lucenay's Peter.  This dog went on to play some of Our Gang as Pete (I think), so he may be Pete the Pup on IMDb, even though Pete the Pup is not his real name.

The difficulty with Wikipedia is that it contradicts the IMDb listings for Pete the Pup when it says that Harry Lucenay left Hal Roach in 1932 and moved to Atlantic City, NJ.  So which dog made those three movies from 1933 to 1937 that included Pete the Pup?  Wikipedia lists Pal as dying in 1930, and Lucenay's Peter in 1946.

For more confusion, just Google "Pete the Pup."  Pitbullsontheweb.com has a complete biography of Pete the Pup with many more contradictions.  Various stories on the web have Pete being either poisoned or shot to death.  One site even posts a newspaper clipping, but it does not cite which paper or give a date.

Other dogs obviously played Pete in several Our Gang films, and I doubt anyone will ever get the entire list together.  Even the ring around his eye would change sides from film to film.  Apparently Pal the Dog had most of a ring and the rest was filled in with dye, so that started the identifying mark.  When Pal retired, Lucenay's Peter had the ring added to his face.  There is one account that said Max Factor was the makeup man who did the ring.  Who knows!  But, whatever you call him, Pete was a great Bit Actor.
Posted by Bit Part Blogger