I remember seeing 2001: A Space Odyssey when it first came out.  I believe it was at the Cheltenham Theater in the Gimbels shopping center.  I was 18 years old and can remember how thought provoking the movie was.  My friends and my future wife would discuss the film in ethereal terms, trying to make sense of it, as young adults are wont to do.  Of course, I had no idea what it meant...and I still have no idea what it means.  Gimbels is gone, as is the old RKO Cheltenham Theater, and that wife is history too!

The cast was good, although I didn't really know any of the actors at the time.  A look at some of the minor roles 42 years later is interesting.  Douglas Rein was the voice of HAL 9000, the computer on the space ship.  He was also the voice of HAL in 2010, which was made in 1984.  Now it's 2010...I wonder what else they have in mind?  Their predictions are falling behind. 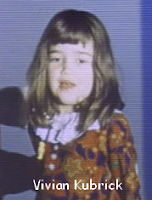 Vivian Kubrick, the eight year old daughter of producer/director, Stanley Kubrick, played Dr. Floyd's daughter whom we see on the video phone on the shuttle.  She was in four of daddy's films, including The Shining (1980) and Full Metal Jacket (1987).  She is 50 now.
It looks like 21 people were in the credits as Apes!  That reminds me of the line in Tootsie when Dustin Hoffman says, "I did an entire endive salad once!" to his agent while trying to get the TV soap part as Tootsie.  I guess "Ape" would look good on any actor's resume...certainly better than "Salad!"
One of the astronauts was played by Mike Lovell, apparently no relation to real astronaut Jim Lovell, the star of Apollo 13.  Not the movie, the space mission!  But he was in the movie Apollo 13 as well, as the captain of the USS Iwo Jima, welcoming himself (played by Tom Hanks) back from space. 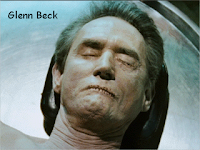 Is 2001: A Space Odyssey a classic film?  I guess it is, if you can figure it out.
Posted by Bit Part Blogger